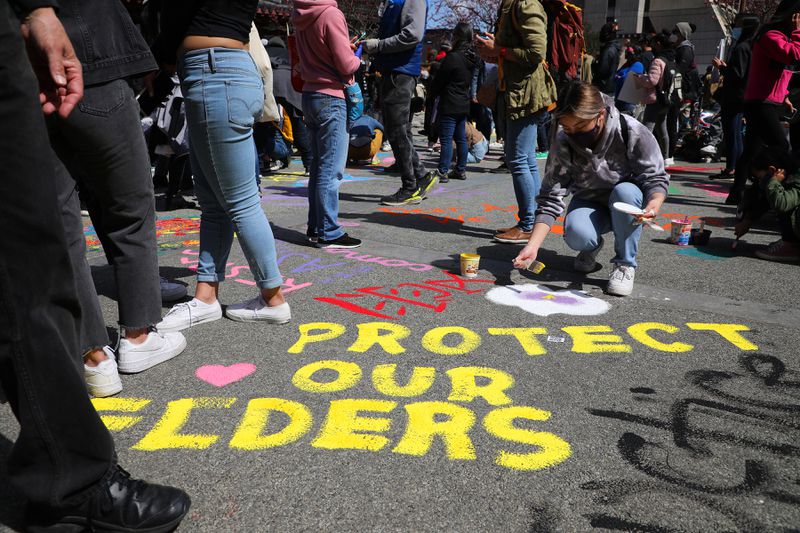 After a Chinese grandmother was attacked by a white man in broad daylight in San Francisco last week, she fought back.

The woman, Xiao Zhen Xie, 75, was punched while walking down Market Street on March 17. She responded by hitting her assailant with a board. A suspect was arrested, and Xie was left with several injuries, including two black eyes.

The attack — the aftermath of which was captured in video footage that was shared widely on social media — happened during a surge of anti-Asian violence in the Bay Area and across the United States. It traumatized Xie and left her with long-term injuries, according to her family.

Xie’s grandson, John Chen, used GoFundMe to raise money for medical treatment and therapy for his grandmother. The public response to his fundraiser far exceeded the family’s goal: By Thursday, about $1 million had been raised.

On Monday, Chen said on the GoFundMe website that the family was planning to donate all the money to fight anti-Asian racism.

“The AAPI community is bleeding from this violence and hatred,” Chen wrote, using an acronym for Asian American and Pacific Islander. “We as a community cannot stay silent nor be silenced anymore. That is why our family plans to donate ALL funds generated in this GoFundMe to help the AAPI community recover, and combat racism.”

Over the past year, the Bay Area has seen a spate of violent attacks and robberies against Asian Americans, as well as pandemic-related racism.

The problem is widespread. In a report this month, Stop AAPI Hate, a group that tracks instances of violence and discrimination against Asian Americans in the United States, said it had received reports of 3,795 incidents between March 19, 2020, and Feb. 28. But it said the number could be higher because not all episodes had been reported.

The report was released on the same day that eight people, six of them Asian, were fatally shot at three Atlanta-area massage parlors. Stop AAPI Hate called the shootings “an unspeakable tragedy” for the victims’ families and the Asian American community, which has “been reeling from high levels of racist attacks.”

The attack against Xie was one of several that have been captured, at least in part, on video.

Her assailant, whom police identified as Steven Jenkins, 39, first attacked an 83-year-old Vietnamese man, Ngoc Pham, who had been grocery shopping March 17. According to police, the attacker was then chased by a security guard. He punched Xie while being pursued.

Video footage from the immediate aftermath of the assault shows Xie holding an ice pack to her face and telling officers and bystanders about her attacker.

“One big punch came down on me,” she said in Cantonese, wailing in distress.

“Investigators are working to determine if racial bias was a motivating factor in the incident,” the San Francisco Police Department said in a statement last week.

Police did not immediately respond to a request for comment Thursday.

Jenkins has pleaded not guilty to the charges against him, which included elder abuse and assault, according to his lawyer, Eric McBurney. Jenkins is being held without bail.

“It’s been difficult on the Asian American community — of course I understand,” McBurney said Thursday. “These elderly, first-generation immigrants who give up the world to give their kids the American experience — there should be an award for people like this.”

McBurney added that he would provide more details about Jenkins, and about what happened March 17, in the near future.

“As more information is shared,” he said, “I think that people will see that this is more complex.”

The day after the attack, Chen set up the fundraiser on GoFundMe. He wrote that Xie “has been severely affected mentally, physically and emotionally,” adding that she said she was “afraid to step out of her home from now on.”

As days passed, the donations grew. On Tuesday, Chen wrote that his grandmother was finally able to open her swollen left eye and that she was in better spirits than before.

“She also stated multiple times to donate all the funds generated in this GoFundMe back to the Asian American community to combat racism,” he added. “She insists on making this decision, saying this issue is bigger than her.”

It is unclear how the funds will be spent. Xie and Chen could not be reached Thursday, and GoFundMe did not immediately respond to a request for comment.