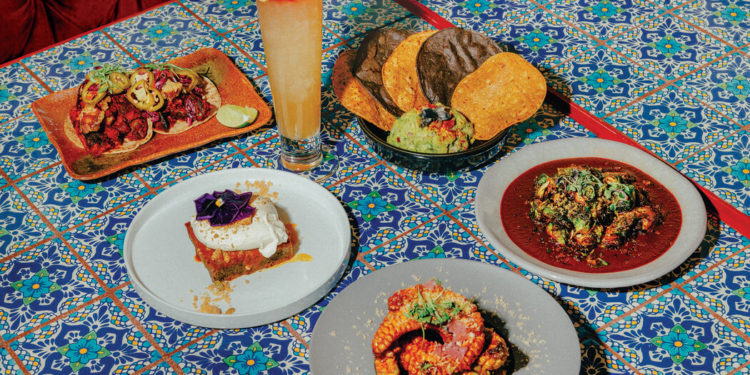 In the past few years, a handful of chefs across North America have started redefining plant-based Mexican cooking. At the El Paso and Austin, Texas-based Lick It Up, 38-year-old Edgar Delfín serves traditional border dishes like flautas stuffed with potatoes and beans, as well as vegan variants like burritos with soy chorizo and mushrooms. At their restaurant Xochitl Vegan in the Los Angeles neighborhood of Boyle Heights, Stephanie Villegas and Dino Ponce, both 33, fill their tacos with marinated hibiscus flowers and make decadent carnitas — the emblematic Michoacán pork dish — by frying crisp, fibrous enoki mushrooms in grapeseed and avocado oils. And in New York City, the restaurant and masa mill For All Things Good serves triangular pockets of masa called tetelas, stuffed with black beans and epazote, alongside comal-crisped sopes (flat rounds of masa with pinched-up edges) topped with wild mushrooms sautéed with mezcal. For her menu at the East Village mezcal and tequila bar Etérea, 27-year-old Xila Caudillo, originally from Southern California, recently debuted dishes like corn ribs elote — crispy-sweet parentheses of yellow corn spangled with smoked paprika — and an ingenious tostada that replaces translucent sheaths of tuna with jewels of tomato concassé cured in tamari and seaweed.

Vegetable-forward cooking is hardly new in Mexican cuisine; it has deep roots in Indigenous cultures and a strong presence in Mexico City’s culinary identity. For some years now, fashionable neighborhoods like Roma and Condesa have been home to explicitly vegan taquerias such as La Pitahaya, where amaranth- and sesame-fortified tortillas are stained fuchsia with beet juice and loaded with curried potatoes or hibiscus pibil. But vegetable-based antojitos (literally “little cravings”) are as ubiquitous as their meaty counterparts at street stalls that turn out squash blossom quesadillas and football-shaped patties of masa called tlacoyos, stuffed with black beans or mashed favas and topped with nopales, salsa and an optional flurry of cheese.

Some of the metro area’s most compelling vegetable-forward dishes come not out of vegan kitchens but rather from restaurants like Expendio de Maíz in the Colonia Roma, and Xoletongo, which is a 90-minute drive east of the city in Tlaxcala, both of which draw on the traditions of rural communities for whom costly meat remains an important but often secondary part of their diet. At these spots, meat-based moles are frequently eclipsed by the foundational ingredients of Mesoamerican agriculture: corn and squash; beans and chiles; wild greens and foraged mushrooms. Dishes such as these are not intended to be innovative, but they have started to expand perceptions, particularly in the United States, of what constitutes Mexican cooking — and, by extension, the depth and diversity of Mexican identity itself. — Michael Snyder

Lavish Nail Looks for All

Though showboating glam rockers have long flirted with nail art — a practice that may date back to 3200 B.C., when southern Babylonian soldiers were thought to have carried gold manicure sets — today’s men seem to have embraced digital embellishment in a more sustained way. Last year, the musicians Tyler, the Creator; Machine Gun Kelly; Harry Styles; and Lil Yachty each released gender-neutral collections of nail polish (Tyler’s Golf le Fleur line includes a glitter option in a flower-topped bottle; Styles’s Pleasing offers shades such as Inky Pearl and Granny’s Pink Pearls).

Yet such entrepreneurial endeavors shouldn’t be a surprise, as flamboyance has always found a home in nail art. The designer Marc Jacobs has flaunted a variety of looks on his fingers by the New York City-based nail artist Mei Kawajiri, from crystal-rimmed blue opals (to match his bejeweled vape pen) to Art Nouveau-inspired homages to the queer pioneers Sylvia Rivera and Stormé DeLarverie.

The rappers ASAP Rocky and ASAP Ferg have revealed nails with hand-painted renderings of Frankenstein and Dennis Rodman, while the Puerto Rican trap sensation Bad Bunny showed off domino-covered nails on a magazine cover last fall. No one, of course, is doing it quite like Lil Nas X, who recently wore a diamond manicure with matching grills that cost the rapper a reported $58,000. Nails for all? At least in theory. — Nick Haramis

In the Hermès universe, the silk scarf can be a window onto a whole world. The house’s first carré (French for “square”) was released in 1937 and, in the decades since, it has originated more than 2,500 designs, all made by hand. This season, the French illustrator Ugo Bienvenu (who has collaborated with Hermès on several occasions) designed a scarf depicting a beachside promenade, where bathers gather in the surf and frolic on an enormous chessboard.

The artist has cited the legendary Japanese animator and director Hayao Miyazaki as an influence and, indeed, Bienvenu’s short films and drawings are a visual feast — in this case, as densely populated as a “Where’s Waldo” book — with a science fiction sensibility more in line with that of the French artist Jean Giraud (otherwise known as Moebius). Still, with just a few twists or folds, Bienvenu’s magical world can be tucked away in plain sight, revealing the subtle beauty of an intricate accessory. $435, hermes.com. — Jameson Montgomery

An Auberge on Pico Island With Atlantic Views — and Wine

In the 18th century, the wines from the Azorean islands of Pico and Faial (now part of Portugal) were so coveted that Thomas Jefferson, then serving as the American minister in France, ordered bottles from the region — despite his access to French wines. In the late 1800s, the islands’ viticulture was devastated by disease but, today, the Azores Wine Company is one of several passionate producers that are reviving these rare, acidic varietals, one of which you can taste for yourself at the company’s newly opened five-suite auberge (with an adjoining two-room apartment) on Pico overlooking the Atlantic.

The Brutalist-inspired building, with its facade of black basalt, is as striking as the lunar landscape around it. Besides enjoying wine tastings, guests can have a meal of modern tapas, including grilled limpets and sashimi made from freshly caught amberjack. Rooms from about $230, enoturismo@azoreswinecompany.com. — Gisela Williams