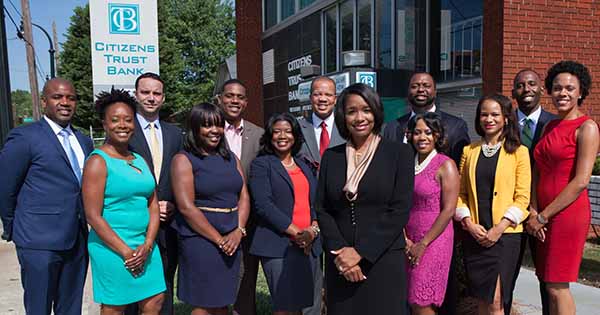 The #BankBlack revolution has already begun. Thousands of African Americans across the country are transferring their money to Black-owned banks that invest in urban communities and businesses. Initiated by several celebrities like Solange, T.I. and rapper Killer Mike, the initiative is in response to years of police brutality, discrimination, and other racial problems that have long existed in America.

African Americans collectively have an annual buying power of almost $1 trillion dollars, and so the idea is to circulate and re-circulate Black dollars within Black communities.

#1 – Alamerica Bank: This bank in Birmingham, Alabama provides a unique banking experience for underserved communities. Their staff of experienced bankers is committed to providing quality and personalized service, offering a full array of banking services, from deposit accounts to loans.

#2 – Commonwealth National Bank: At this bank in Mobile, Alabama, they believe that your business is unique and so your bank should be too. They offer free online banking with no minimum daily balance required and a variety of business accounts designed to help you maximize your banking experience.

(Also see #11 – Liberty Bank, which has branch locations in Tuskegee and Montgomery, AL.)

#3 – Broadway Federal Bank: Based in Los Angeles, California, this Black-owned bank aims to serve the real estate business and financial needs in underserved urban communities. They especially aim to meet the needs of minority consumers who want to take out conventional loans.

(Also see #13 – One United Bank, which has branch locations in Compton and Los Angeles, CA.)

#4 – Industrial Bank: Headquartered in Washington, DC with branch locations in Oxon Hill and Forestville, Maryland, this bank has delivered essential banking and financial services since 1934 that have contributed greatly to the growth and development of the local Black community. In 2019, they opened two branches in New Jersey and one in New York

#5 – Axiom Bank: Headquartered in Central Florida with branches throughout the Jacksonville, Orlando, and Tampa areas, this federally-chartered community bank serves the financial needs of its customers through a wide range of financial products. They provide retail banking services, including checking, deposit, and money market accounts, through 20 branch locations, 19 of which are inside select Walmart Supercenters. (Note: This bank was Black-owned for many years as Urban Trust Bank and even earlier as Metro Savings Bank. Although they are no longer Black-owned, they are a solid, growing community bank that supports urban communities.)

(Also see #13 – One United Bank, which has branch locations in Miami, FL.)

#6 – Carver State Bank: Established in 1927 in Savannah, Georgia, this Black-owned bank has remained a financial services leader for all sectors of the Savannah community throughout its 85 years and is the only bank in the area with an outstanding Community Reinvestment Act Rating.

#7 – Citizens Trust Bank: Since their beginning in 1921, this Atlanta, GA-based bank has responded to market shifts by expanding their electronic platform while still providing the personal touch service that makes them unique to their customers. Thanks to an online #BankBlack social media campaign in July 2016, more than 8,000 new accounts were opened at their branch in just one week.

#8 – Illinois Service Federal Bank: Based in Chicago, this bank aims to be a viable, growing, community development financial services institution responding innovatively to their primarily underserved and minority constituency with superb customer service.

#9 – Self-Help Credit Union: Formerly Seaway Bank & Trust Company, a Chicago-based community bank that served families, non-profits and businesses in diverse neighborhoods. It was established in 1965 to counter discriminatory lending practices and is now recognized as one of the nation’s largest minority-owned banks, with more than $400 million in assets and 240 employees.

#10 – Metro Bank: Based in Louisville, Kentucky, this Black-owned bank works to provide an opportunity where before there was none – whether it is their involvement in a multi-million dollar New Markets Tax Credit project, or a start-up business loan to an entrepreneur providing a much-needed service in an underserved neighborhood.

#11 – Liberty Bank: Primarily based in New Orleans and Baton Rouge, Louisiana, this bank has a sincere focus on service, integrity, and a sincere interest in community and business development. Over the past four decades, they have also expanded to more than 18 branches in six states – including Kansas, Mississippi, Michigan, Missouri, Alabama, and Illinois.

#13 – One United Bank: The first Black internet bank and the largest Black-owned bank in the country, with offices in Los Angeles, Boston, and Miami. They were awarded the highest Bank Enterprise Award by the U.S. Department of Treasury for their community development lending ten times, and they are a designated Community Development Financial Institution (CDFI).

(See #11 – Liberty Bank, which has branch locations in Jackson, MS.)

#15 – City National Bank: Primarily based in Newark, NJ with branch locations in Harlem and Brooklyn, NYC, this Black-owned bank plays a pivotal role in strengthening urban communities. They call themselves a forward-thinking financial institution whose mission is to build economic strength and improve the quality of life within urban communities by providing the highest quality financial services, including low-cost business loans.

(See #4 – Industrial Bank, which has a branch location in Harlem, NY.)

(See #15 – City National Bank, which has branch locations in Harlem and Brooklyn, NY.)

#16 – Mechanics & Farmers Bank: Founded in 1907, this bank is the 2nd oldest minority-owned bank in the United States. They have branches in Winston-Salem, Durham, Raleigh, Greensboro, and Charlotte, and most of their deposits are recycled back into urban communities.

#17 – United Bank of Philadelphia: Based in the city of Philadelphia, this Black-owned bank says that all deposits stay right in the community in a cycle of community, inclusivity, and opportunity. They offer affordable banking services to individuals, families, small businesses, and non-profit organizations.

#19 – Citizens Savings Bank and Trust Company: With branch locations in Nashville and Memphis, TN, this community bank provides friendly and personal service to both individuals and small businesses. They are an equal opportunity employer with 32 full-time employees, 3 convenient offices and approximately $100 million in total assets.

#20 – Tri-State Bank of Memphis: With three branch locations throughout the Memphis area, this a community bank has proudly served the urban community for over 65 years and have a history of leadership, concern and commitment.

#21 – Unity National Bank: Based in Houston, Texas, with a branch also in Missouri City, this Black-owned bank creates opportunities to help people and businesses grow and enhance the quality of life. They do that through service and services that respect their time, make banking easier and keep them financially competitive.

#22 – First State Bank: Chartered in 1919 in Danville, VA, this locally-owned and operated bank provides the personal touch to banking services. From checking and savings products to loans and other financial investments, they offer a variety of options to fit your needs.

#23 – Columbia Savings & Loan Association: Based in Milwaukee, WI, this is the oldest Black-owned financial institution in the state, and they have been serving commercial and individual accounts to urban customers since 1924. They offer checking accounts, and consumer and business loans.