Biden Administration May Bring Whole Families To U.S. To Reunite With Separated Children, Not Just Parents 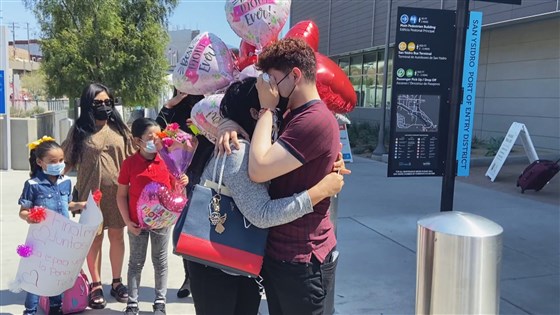 By Jacob Soboroff and Julia Ainsley

WASHINGTON — Homeland Security Secretary Alejandro Mayorkas and the director of the task force to reunite families said Thursday that the Biden administration is working to reunite entire families who were separated during the Trump administration, meaning not just parents but also siblings of separated children could be able to get permanent legal status in the U.S.

Mayorkas said in an interview, “We are very much focused on providing stability to the reunited families, and not just for her but for the family as a unit,” referring to a woman who had just been reunited with her son.

Michelle Brané, the executive director of the Biden administration’s task force to reunify the separated families, said her group is working on a process in which “immediate family members can also apply.”

“That includes siblings, another, you know, the partner or spouse, other parents if they’re in the picture,” she said. “So we arranged for that. Once those applications are approved, we will facilitate travel arrangements.”

Mayorkas said he could not guarantee that the families would have permanent legal status, but he said, “We’re going to do everything we can to make it work out.”

This week, the Biden administration is reuniting four families separated in 2017 and 2018. The White House estimates that more than 1,000 remain separated.

Mayorkas also sharply defended his decision not to launch an investigation of Trump administration officials — at least for now — for their roles in the family separation policy.

“As I’ve mentioned, I’m not looking at accountability at this moment in time. And so I think that question is before its time,” he said after being asked about an accountability investigation several times.

Brané said her group has identified parents and children who were separated but whose separations were unknown to the government because of poorly kept records.

“We are finding evidence of separations,” Brané said, speaking of an additional trove of documents that is being reviewed by the task force, which includes families separated in the early days of the Trump administration.

Mayorkas defended the Biden administration’s use of Title 42, a Centers for Disease Control and Prevention authority that is being used to block families and single adults from entering the U.S. to block the spread of Covid-19.

Although rates of Covid-19 are going down in the U.S. as more people are vaccinated, Mayorkas said Title 42 is still “a public health imperative.”

He said the Biden administration’s decision to allow unaccompanied children to enter the U.S., thereby forcing some parents to separate from their children to send them across the border, is “absolutely” different from the Trump policy of family separation. Mayorkas said that Homeland Security is aware of the position some parents are in and that it is “very focused on that and what we can do to address it.”

“That is so markedly different than a policy that rips a child … out of the hands of a mother or father for the express purpose of deterring others from seeking asylum in the United States. Those are two very different worlds,” he said.

Asked whether he would consider making victims of climate change, such as those suffering from drought in Central America, eligible for asylum, Mayorkas said he had not thought about it.

“The question is how do we as a country wish, and other countries similarly situated that believe in providing relief to those individuals in need — it’s quite frankly an incredibly proud tradition of ours — how do we want to address the growing number of individuals who are situated, and perhaps some of them by reason of climate change?” Mayorkas said.

Asked whether the current levels of immigrants crossing the southern border — a 20-year-high — and the number of children in U.S. custody — more than 22,000 — have created a humanitarian crisis, Mayorkas said the real crisis is the one the immigrants are fleeing.

“The humanitarian crisis that I think exists is the fact that in the Northern Triangle countries of Guatemala, Honduras and El Salvador, parents feel compelled to send their children in the hands of smugglers alone to the Mexico-U.S. border,” he said.

Mayorkas said so-called sanctuary cities, where local law enforcement agencies do not consistently report people with immigration violations in their custody to the federal government, can pose a problem when dangerous immigrants are released.

“I see the profiles of some individuals that pose an extraordinary threat to public safety,” Mayorkas said.