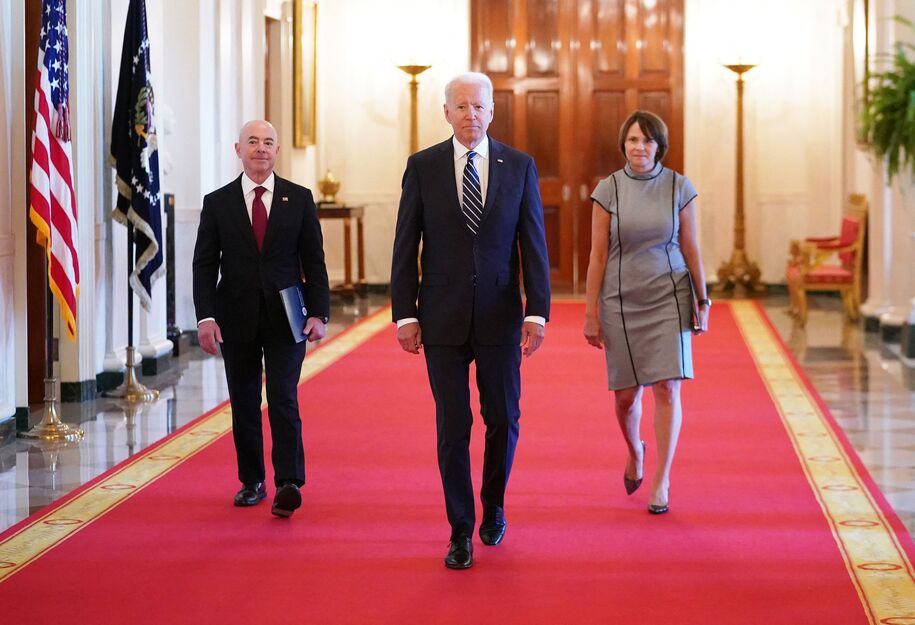 Nearly 10 million immigrants in the U.S. have permanent resident status but have not yet naturalized and become U.S. citizens. CNN reports that the Biden administration is now set to undertake an “unprecedented effort” leveraging government agencies to encourage millions of immigrants to take this final step and apply.

“The idea is to find a whole-of-government way to reach out to people who are able to naturalize,” U.S. Citizenship and Immigration Services (USCIS) said in the report. Agencies and federal systems in the reported plan include the U.S. Postal Service, the VA, and national parks. USCIS would partner “with the US Postal Service to display promotional posters at Postal Service facilities about becoming a US citizen,” for example.

“Previous administrations have promoted naturalization, the Citizenship and Immigration Services official told CNN, but the forthcoming strategy by the Biden administration tasks additional agencies to work with USCIS to have broader outreach,” the report said. The VA would promote naturalization to current and former service members (the administration has recently announced a plan to return deported veterans and family members), while national parks would host naturalization ceremonies.

President Biden himself hosted a naturalization ceremony going into the Independence Day holiday on Friday, when 21 immigrants were sworn in as U.S. citizens. The ceremony was also attended by Department of Homeland Security (DHS) Secretary Alejandro Mayorkas and acting USCIS Director Tracy Renaud. Ur Jaddou, a former USCIS chief counsel and immigrant rights advocate, has been nominated by the administration to head the agency.

“You have each come to America from different circumstances and different reasons and 16 different nationalities,” the president said in his remarks at the White House. “But like previous generations of immigrants, there is one trait you all share in common: courage. It takes courage to get up and leave everything you know and go to another place, no matter where it is. You know, the only homes you’ve ever known, the lives, the loved ones who weren’t able to come—for a new start in the United States of America.”

Further honored at the event by the president was Sandra Lindsay, who was the first American outside of a clinical trial to receive the COVID-19 vaccine. Originally from Jamaica, Lindsay was given USCIS’ Outstanding Americans by Choice Recognition, “which recognizes the naturalized citizens who have made significant contributions to our country through civic participation, professional achievement, and responsible citizenship,” the president said.

“Sandra’s vaccination card and hospital scrubs and the badge that was—she wore will be included in the Smithsonian’s National Museum of American History exhibit on COVID-19,” he continued.

The 21 immigrants were among the more than 9,000 people who were sworn in as U.S. citizens in recent days. “Biden has sought to strike a different tone from that the previous administration on immigration, underscoring the contributions immigrants make to society and moving away from anti-immigrant rhetoric,” CNN reported. Unable to slash legal immigration through legislation (like the Tom Cotton-backed bill popular among white supremacists), the previous administration used the novel coronavirus pandemic as an excuse to do it through executive fiat.

Immigrant rights advocacy organization America’s Voice hailed the Biden administration’s steps to encourage naturalization, while also calling on Democrats to use their power to pass permanent relief for millions of undocumented people. Senate Democrats have said they’re seeking to pass a pathway to citizenship for some immigrants through the reconciliation process. “Let us commit to this being the year to further extend and expand citizenship,” said Executive Director Frank Sharry. “This is the moment to formally recognize deeply-rooted undocumented immigrants as the Americans they already are. The nation wants it. It’s time for those in the majority to deliver it.”

“USCIS remains committed to empowering immigrants to pursue citizenship along with the rights and opportunities that come with it,” Renaud told CNN. “There is no greater testament to the strength of America than our willingness to encourage others to join us as U.S. citizens as we work together to build a more perfect union.”