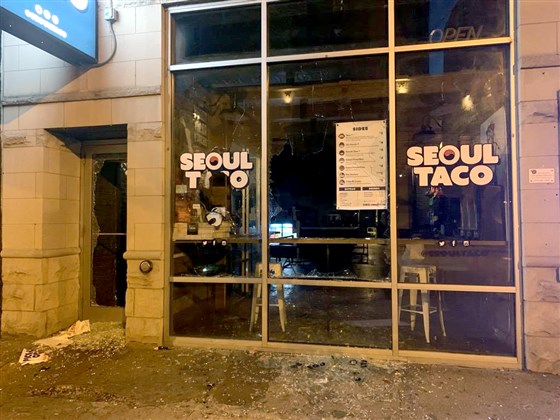 EVERYTHING IN MY STORE WILL BE REPLACEABLE, one shop owner wrote, while lives are being senselessly lost, on a way too regular basis, is the way bigger issue.

When David Choi, owner of the street food chain Seoul Taco, pulled up to one of his Downtown Chicago restaurants on Sunday morning, he saw doors and windows reduced to a pile of shards, a vandalized flat-screen TV, and the cash register and several iPads missing, presumably stolen.

Choi had been preparing to resume dine-in service after a two-months shutdown amid the coronavirus pandemic. The looting not only delayed that indefinitely but also halted to-go service. He’s now hemorrhaging cash while looking to hire a contractor on short notice to board up the shop. Once his insurance company assesses the damage, he’ll have to pay the deductible, too.

It’s been devastating and frustrating on our side, Choi told NBC Asian America. We should be making food and serving the community, but this is taking away from all that.

Still, in his first message to customers, he made clear that those who ransacked his store in no way weakened his support for the fight against police brutality.

In the week since George Floyd, an unarmed black man, died in the custody of Minneapolis police, hundreds of largely peaceful demonstrations have erupted across the country, with many followed by looting and arson. From California to New York, scores of Asian businesses were caught in the crossfire, suffering extensive property damage atop already prevalent anti-Asian racism.

But owners young and old continue to express solidarity with protesters and vocally draw the distinction between material and human loss.

Last Wednesday, the family of Gandhi Mahal, a fire-damaged Indian restaurant in Minneapolis, wrote in a widely shared Facebook post: Let my building burn. Justice needs to be served. When looters broke into Teaism, an Asian cafe in Washington, its founder tweeted: Before anyone puts a single word in our mouths. Black lives matter.

For Choi, the black and brown Americans who have long been abused by the police are not just victims of a racist, dysfunctional system but also close friends of his. We have to look at the bigger picture, he said. Injustice and racial inequality just needs to stop.

At the same time, he said, plundering small businesses like Seoul Taco does no justice to the cause and ends up hurting people from vulnerable communities. Every day the restaurant is closed, for example, translates to more lost wages for his 20 employees, many of whom are black or Latino.

I understand the anger and frustration, but there has to be a better way to resolve this, he said.

Since Saturday night’s mayhem, Seoul Taco has received an outpouring of aid from the community. After seeing Choi’s Facebook post, one customer started a GoFundMe page that has already raised more than $3,000. Some neighbors showed up at the restaurant with brooms and sweepers to clean up debris. Others helped board up glass.

The support from neighbors, customers and complete strangers has, in fact, offset the anger that some owners had for rioters.

Win Latt, who runs Win Asian Market in Buffalo, New York, said he was already in bed when a customer called on Saturday night to say his shop had been raided. The next morning, a contractor offered to board up his windows free, sparing him hundreds of dollars.

As a Burmese refugee, Latt said he was arrested at age 13 for peacefully protesting against military brutality. So he understands and backs the Black Lives Matter movement. He realizes, too, that the help he’s received from others also stems from solidarity with the activists.

He said he supports the movement but points out that he feels protesting and breaking property are not the same thing.

There’s no such thing as perfect system, but together we can rewrite law, he said.

With no foreseeable end to the protests and no guarantee if they turn violent some business owners have shelved hopes for a speedy return to normalcy.

On a personal level it’s very upsetting, said Russell Brunton, the founder of Indochine Asian Dining Lounge, a Thai restaurant in the greater Seattle area that was vandalized Monday evening. For the last 15 years, he and his wife have invested all their time and money into the business, and it’s hard to see that taking a back seat to another cause.

But there are other priorities right now, he said. And I think everyone has a right to live free from persecution and violence, and to express that right in protest.