‘Deal With The Root Causes’: Harris Visits US-Mexico Border After Months Of Pressure On Immigration 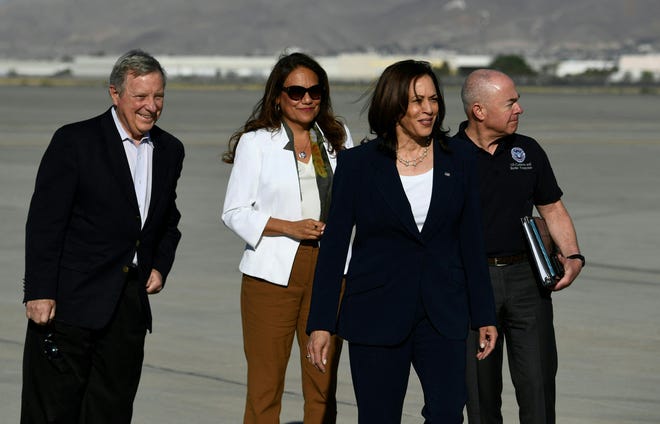 WASHINGTON – Vice President Kamala Harris landed in El Paso Friday after facing pressure for months to visit the United States’ southern border after being tasked with addressing the root causes of migration from Central America that is contributing to record-level apprehensions at the U.S.-Mexico border.

Harris, who has maintained her focus is on diplomatic relations in Central America and Mexico, rather than the situation at the border, has been working on diplomatic efforts to stem migration from the Northern Triangle countries of Guatemala, Honduras and El Salvador.

Speaking with reporters on Friday, Harris said that it was always the plan to visit the border.

“The reality of it is that we have to deal with causes, and we have to deal with the effects,” Harris told reporters after deplaning from Air Force 2. “So being in Guatemala, being in Mexico, talking with Mexico as a partner, frankly, on this issue, was about addressing the causes, and then coming to the border… is about looking at the effects of what we have seen happening in Central America.”

Harris is being accompanied on the trip by Homeland Security Secretary Alejandro Mayorkas, Sen. Dick Durbin, D-Ill., who has been helping with negotiations on immigration legislation on Capitol Hill, and Democratic Rep. Veronica Escobar, who represents parts of El Paso.

After arriving Friday morning, Harris toured a central processing facility run by Customs and Border Protection, and was greeted by Gloria Chavez, chief patrol agent of the El Paso Sector as well as other border patrol officials. During her tour, Harris spoke with CBP officials working at the facility. At one point, she stood over the shoulder of a border patrol agent as he walked her through his work on the computer.

CBP officials described new technology that is being used to quickly process migrants and cut down on work for border patrol agents. The officials also explained to Harris how a working group that was created by Mayorkas has helped streamline the process. The officials said they hoped to work with the Department of Justice to get immigration judges into their system to ease the process of giving migrants court dates.

“You guys have made incredible advances and success in just the last couple of months,” Harris told the CBP officials.

Harris is making an unannounced trip to the Paso del Norte port of entry, where she will tour an area for screening asylum applicants as they enter from Mexico. She’ll a view a secondary processing area for migrants, and see an outdoor vehicle inspection area used to screen vehicles crossing the border for illegal goods or activities, her office said.

Mayorkas told reporters aboard Air Force 2 that he recommended the vice president visit El Paso “because it is one of the busiest sectors” across the border “and it provides the vice president with an opportunity to see the full array” of challenges facing the Department of Homeland Security.

Harris’ visit comes days before former President Donald Trump will be heading to the border with Texas Gov. Greg Abbott. A group of pro-Trump protesters held signs outside the CBP facility, protesting the vice president’s visit.

“When you talk about addressing the root causes of migration, all of the entirety of the immigration work of the administration is connected. What’s happening at the border is directly connected to what’s happening in Central America,” Sanders told reporters in a call Thursday evening.

She said Harris’ trip will help “inform” a strategy on the root causes of migrant that the administration will release “in the coming weeks.”

The Biden administration has faced a large increase of migrants coming to the U.S.-Mexico border. In May, CBP had 180,034 encounters with migrants at the border, the highest number in at least two decades. The majority of migrants were turned away under Title 42, a Trump-era measure that allows migrants to be expelled to stop the spread of COVID-19, and some of the encounters were by individuals who have repeatedly tried to cross the border.

CBP had 22,219 encounters with migrants at the border in the El Paso region in May, according to data from CBP.

Harris in March was tasked with focusing on the diplomatic efforts to address the root causes of migration from the Northern Triangle countries. As part of that role, Harris earlier this month made her first trip abroad to Guatemala and Mexico, where she met with Guatemala President Alejandro Giammattei and Mexico President Andrés Manuel López Obrador.

The vice president for months has been pressured by Republicans and some Democrats on Capitol Hill to go to the border, arguing she needs to witness the toll the increase in migrants is taking on border towns and facilities.

During an interview conducted during her trip in Guatemala, Harris was criticized after she said “I haven’t been to Europe” either when responding to why she hadn’t been to the border yet.

“I don’t know why she engaged in this self-inflicted wound,” Sen. Roger Wicker, R-Miss., told USA TODAY. “It seems to me she should have gone down immediately. Better late than never.”

Sen. Tammy Baldwin, D-Wisc., told USA TODAY she’s glad Harris is going to the border, saying it adds a “new dimension” to her diplomatic mission she began with the Northern Triangle countries.

Some experts, activists and politicians believe Harris’ visit to the border may help shape critical policies to address root causes from the Northern Triangle region, as well as showcase where the Biden administration stands on how they process and hold migrants. However, others said the bulk of Harris’ work to address root causes will happen abroad diplomatically, rather than domestically.

“I think there’s nothing like being there in person, and having the chance to speak with people, to better understand the concerns and issues, and then be able to craft policy and prioritize the issues,” said Lucy Bassett, associate professor of practice of public policy at the University of Virginia, who has also researched migrant children and families at the border.

Aside from controlling the flow of migrants, the Biden administration faces pressure to end Title 42. Bassett noted that Harris’ trip could impact when the policy will end.

The White House is also continuing to work on processing migrants that were forced to stay in Mexico as they await court hearings due to a Trump policy called the Migrant Protection Protocols. The White House is also facing criticism over some of the emergency influx care facilities housing unaccompanied children.

At Fort Bliss, which is located near El Paso, sources told the El Paso Times, part of the USA TODAY Network, that there are dangerous and distressing conditions at the emergency shelter there.

Bassett said “the root causes are so complex,” and that Harris’ visit to the border could benefit her on better understanding what happens to migrants once they arrive in the United States after fleeing from their home countries.

“I think by having been in Central America and now getting to our border, she’ll see in person what happens to the people who have fled due to those root causes, and what kind of U.S. infrastructure has to respond,” Bassett said.

Bassett said she believes addressing migration is a “two pronged approach,” encompassing the root causes and “providing people who do cross our border with the right kind of services and support.”

“It’s not just we have to deal with the root causes … that will take so much time to change that in the meantime we also need to improve the systems, whether that’s having enough Border Patrol and judges, and improving the speed with which we can safely identify guardians and family members for unaccompanied kids,” Bassett said.

Eric Hershberg, director of the Center for Latin American and Latino Studies at American University, said he doesn’t believe Harris had to go visit the border because it’s not part of her role in addressing the reasons why people are coming from Central America.

“El Paso has nothing to do with the root causes of migration, so I don’t see what the connection would be between this trip, and the administration’s efforts to address the root causes,” Hershberg said, adding that “the border is the focus of quite a bit of criticism from the administration’s opponents domestically, who are trying to make the argument that there is an out of control crisis.”

Hershberg said while Harris cannot address root causes at the border, she will likely be looking at where at migrants are processed and held.

“The fact that the vice president is on a trip with the secretary of DHS signals the degree to which the administration takes seriously this question of its ability in partnership with nonprofit, nongovernmental organizations that work with and supplement the efforts of the federal government,” Hershberg said. “That’s an important message.”