Filipino Restaurants Are Thriving In Chicago, Despite Pandemic Hardships: ‘So Many People Of Different Colors Are Coming In.’ 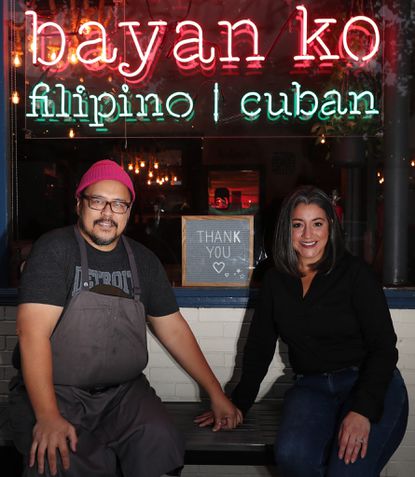 The COVID-19 pandemic is relentless in the challenges it has posed for restaurants and bars. But take a look at Chicago’s burgeoning Filipino food scene, and you’d hardly know it.

It seems his predictions have come to pass during a most unusual time. Since the start of the pandemic, Filipino American restaurants are thriving, winning national acclaim, opening and expanding, even as they adapt along with the rest of the industry to the ever-changing conditions.

Letrero’s Bayan Ko, a Filipino-Cuban restaurant in the Ravenswood neighborhood, celebrates its third anniversary this week with two dinners Tuesday and Wednesday served kamayan-style, a traditional Filipino meal during which patrons eat with their hands from family-style portions communally served atop a table lined with banana leaves.

It’s a big moment for a small, independently owned restaurant that opened at the end of 2018. Letrero and partner Raquel Quadreny launched the eight-table storefront and found customers were drawn to the intimate dining room and culinary mashup of their shared Filipino and Cuban heritages. They’ve gingerly navigated the pandemic with the help of patio seating and takeout, and a loyal base of fans.

In that time, Chicago has experienced a cultural shift in its understanding of Filipino food. Lumpia, lechon and ube have become increasingly well-known, and new restaurants such as Cebu, Kasama and Bayan Ko have turned into media darlings. This month, Cebu announced plans to expand with a French-Asian bakery in Naperville, and Kasama was one of two Chicago restaurants on The New York Times’ list of 50 most exciting restaurants in America.

One theory behind the rapid rise is that a millennial generation of chefs have matured, paid their dues in others’ kitchens, and are at a stage where they can take their careers into their own hands.

“Our generation — the young generation — just wants a chance to say, ‘Hey, we’re here,’” said Letrero, 42. “The young generation of Filipino cooks and chefs going to culinary school in the early 2000s (and) working for other people said to themselves, ‘If I ever have my own place, I’m going to take all these skills and open a Filipino restaurant.’”

To Kathy Vega Hardy, success also depends on the community rallying around a fledgling food business.

Vega Hardy, 38, started A Taste of the Philippines in Denver before moving the food truck and catering business to Chicago in 2018.

She began by working at Daley Plaza farmers’ markets and as a pop-up in the South Loop. She opened her first brick-and-mortar iteration in the Chicago French Market in July 2020, just as outdoor dining was opening up and restaurants were fine-tuning new ways of offering takeout.

Less than a year later, she was moving into a new slot in the market with double the capacity. She had to hire a full-time sous chef to keep up with orders, Vega Hardy said.

“The ultimate compliment is when customers say we feel like home or having our food makes them miss their mom,” Vega Hardy said.

During times when dining out — or any kind of out-of-home leisure — was a scarce luxury, food became one of the only sources of entertainment.

“Another big compliment is the community and their support, loving our food both in person and liking and sharing our food on social media,” said Vega Hardy. “Black, white, Filipino — everyone.”

“People of every color are starting to understand it,” he said. “So many people of different colors are coming in.”

And as tourism returns to Chicago, that community continues to grow.

“We have our regulars, and we also have people who just landed in Chicago coming in right from the airport from New Orleans, Los Angeles, Texas,” Vega Hardy said. “Our reach is going beyond just Chicago.”

Just as important as a network of eager diners, the Filipino food community in Chicago is tight-knit and devoted to uplifting one another. Vega Hardy has a collaborative kamayan dinner planned with French Market neighbor Saigon Sisters, and also has plans for lunch and dinner collaborations with Crumbs and Creams, maker of silvana cookies.

“I pour positivity into the Filinpinx American (and) Filipinx diaspora community, which has circulated good energies, keeping our regulars returning and draws new folks in,” Fontelera said in a message.

Along with other food and art vendors, Boonie Foods will partake Saturday in Filipinx Market, a one-day pop-up with DJ sets and food from Fontelera at Fernwood Barbers (4025 N. Damen Ave.).

That focus on collaboration and mutual support is what has helped Isla Pilipina stay in business for 15 years, said founder and co-owner Ray Espiritu, 38.

“We hang out and help each other,” Espiritu said. “While each of us have our personalities at work, we also have history in our blood. People are noticing it and are continuing to notice.”

Isla Pilipina closed its 15-year-old location in Lincoln Square just before the pandemic and reopened as Isla Filipino in September inside Urbanspace, a new downtown food hall. It’s a smaller venue and a lot different in the Loop, Espiritu said — but it’s also good to be back.

“The time we get to chat with our customers is reduced to a couple of minutes,” Espiritu noted of the food hall format. “We have returning customers from our old location and people are telling their offices about us. We’re still adjusting.”

While the pace might be much quicker, the new venue allows Isla to pivot more easily and take advantage of partnership opportunities, Espiritu said.

And it’s that spirit of collaboration that will help Chicago’s Filipino community continue to flourish, said Hialy Gutierrez, founder of Justice Cream. The vegan ice cream pop-up takes a grassroots approach to community building, donating all profits to organizations such as the Alliance of Filipino Immigrants for Rights and Empowerment (AFIRE), Black Lives Matter Chicago and Organized Communities Against Deportation.

“It’s not charity — it’s mutuality. Their vision is also our vision. These relationships — that’s how we survive capitalism, valuing relationships more than profit,” said Gutierrez. Justice Cream meets regularly with these community partners to ensure a collective process in imagining its own brick-and-mortar space, for which it has already started fundraising.

To Gutierrez, it’s important to mark this moment for Filipino cuisine in Chicago, particularly during October, which is national Filipino American History Month. But even while celebrating the present, it’s just as important to remember the past, she said.

“History is part of (Filipino American History Month) because of the systems we’ve been affected by and contributed to,” she said. AFIRE, for example, was instrumental in passing the Domestic Workers’ Bill of Rights in Illinois five years ago after seeing undocumented domestic workers from the Philippines being exploited by unsavory employers. To aid in AFIRE’s work, all profits from Justice Cream’s Purple Root for Domestic Workers goes to the organization.

“Justice Cream is not just cultural food, it’s the power of storytelling through food,” Gutierrez said.

And there are plenty more stories to tell.