For Black Americans, The White Terror In D.C. Looks Familiar 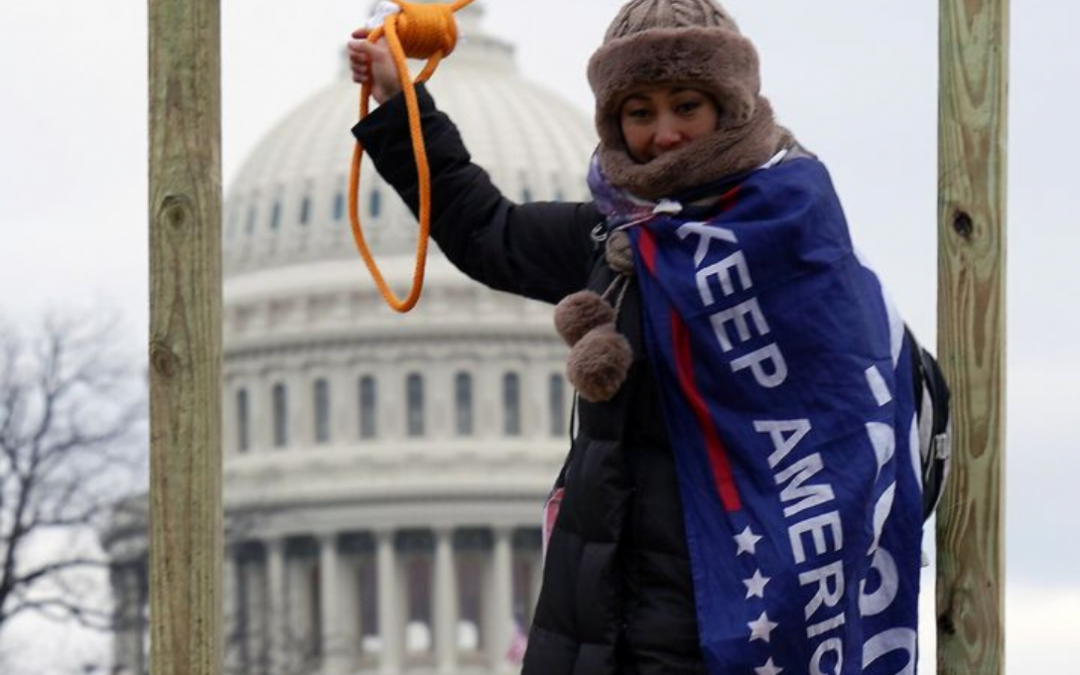 To suggest pro-Trump Capitol riots don’t “represent who we are” ignores the long history of white supremacy, racial violence and retaliation in this country.

They’d lost their power and wanted a return to normalcy. They stood back and they stood by as they carefully planned an insurrection to attempt to regain control. They turned to violence in an effort to “make America great again.”

This was the case for pro-Trump rioters in 2021. It was also the case for white supremacists in Wilmington, North Carolina, in 1898, in America’s first and only successful coup d’etat.

During the Reconstruction era, a period lasting about a decade after the Civil War until 1877, biracial governments came to power in cities across the South. Still reeling from defeat of the Confederacy, Southern Democrats often retaliated against this new power structure. On Nov. 10, 1898, a mob of white men marched on City Hall in Wilmington with their pistols and rifles to overthrow the local government and remove Black and white political leaders from their posts. They were successful. White supremacists took over. The mob destroyed Black-owned businesses, including the town’s Black newspaper. Dozens of Black residents ended up dead.

“What happened in Wilmington became an affirmation of white supremacy not just in that one city, but in the South and in the nation as a whole,” author Laura Edwards wrote in “Democracy Betrayed: The Wilmington Race Riot In 1898 And Its Legacy.”

This is the United States today: President Donald Trump, who has espoused racist rhetoric since he first announced his candidacy in 2015, lost his reelection after historic turnout and voter mobilization efforts. His refusal to accept the results of a fair and free election, as well as his spread of lies and conspiracy theories about election fraud, emboldened his base to besiege the U.S. Capitol building, riot on its steps, fire bullets in its halls and terrorize elected officials.

For a few tumultuous hours, the mob stood in the way of Congress certifying the 2020 election results and officially starting a peaceful transfer of power.

At least four people reportedly died Wednesday in the chaos, and dozens more were injured. Nooses, unambiguous symbols of mob mentality and racial terror against Black Americans, were strung up on the Capitol grounds to remind everyone exactly what the rioters stood for — and who they stood against. It was an apt end to a presidency fueled by white backlash to racial progress, as Georgia turned blue for the first time in 28 years, as the state voted to send its first Black senator to Washington, as Kamala Harris prepared to take her place as vice president.

Many saw this coming. The rioters had been planning in plain sight. But perhaps Black Americans were the least surprised by the day’s events. The precedent had been set, time and again. We don’t have to look back that far for reminders: Whether in 1900, or 1925, or 1939, or 1965, or 2020, white terror has been deeply embedded in American culture, especially in the face of Black progress and the quest for freedom and equality.

Several politicos and pundits from both sides of the aisle returned to familiar refrains like “this isn’t America” and that riots don’t “represent who we are.” Yet history tells us another story.

For more than a century, Black Americans have documented and warned us of similar moments where racial terror and white supremacy were the status quo. Several instances — often left out of history books and school curricula — illustrate this narrative. They show a desire to undermine the ideals of our democracy, and demonstrate the hypocrisy in how police respond to Black protest and white lawlessness.

“Those who resist change are reminiscent of the ex-Confederates who, in the years following the Civil War, preferred to dream of a South that never was and never could be rather than accept one that was within the reach of all, if they would join together and make it so,” historian John Hope Franklin wrote in the foreword for “Democracy Betrayed” in 1998. “But many whites in the post-Civil War South saw change — any change — as unsettling and dangerous, and they wanted no part of it.”

“To move in such a direction would be catastrophic as well as tragic,” he wrote. “Retreating to a safer, more secure past was infinitely more attractive and desirable than proceeding into a reckless future that seemed to offer the revulsive prospect of ‘social equality.’”

In 1900, journalist and anti-lynching crusader Ida B. Wells wrote of the mass lynching that took place in New Orleans that July, during which a white mob ran a relentless four-day “campaign of racial terror” against Black residents. The incident, as Wells described it, began with the “inexcusable and unprovoked assault upon two colored men by police officers of New Orleans.” Robert Charles, one of the Black men who was arrested, was attacked by one of the officers; he shot and killed the cop, and evaded arrest. White residents, long fueled by mob mentality as a course of retaliation, were given legal sanction to kill Charles. Reports say at least seven were killed as whites scoured the city preying on Black residents.

Wells’ description of the riots in “Mob Rule in New Orleans” is eerily prescient: “During the entire time the mob held the city in its hands … the police and the legally constituted authorities showed plainly where their sympathies were … The ringleaders of the mob were at no time disguised.”

James Weldon Johnson, the president of the NAACP, wrote to President Calvin Coolidge in 1925, warning that Black voters planned to vote against candidates supported by the Ku Klux Klan. The NAACP and its leaders were demanding that the Republican Party denounce the racist organization, to no avail. (Trump infamously refused to condemn the KKK on television in 2016.)

“That repudiation should be made clear and decisive on the basis of the Klan’s hypocrisy and the violence, disorder and the race and religious hatred known to be an inevitable product of the organization and activity of that body,” Johnson wrote, according to a brief in The New York Times on Sept. 17, 1924.

Less than a year later, at the height of the KKK’s popularity, 30,000 members descended upon Washington, and were welcomed by the city. The Washington Post described the scene at the time: “Phantom-like hosts of the Ku Klux Klan spread their white robe over the most historic thoroughfare yesterday in one of the greatest demonstrations this city has ever known.”

Again, the mob traipsed through the city, unmasked and sure there would be no threats against their livelihood. “The shedding of the masks was a subject of internal debate for the group, a move that some felt would grant their organization added legitimacy and respectability,” the Post reported.

In 1939 — on Juneteenth, no less — a mob arrived at 12-year-old Opal Lee’s house. About 500 white residents burned down the family’s house in Fort Worth, Texas. For days, the neighbors had showed up, throwing rocks and terrorizing the Lees, who had just moved into the neighborhood. When Lee’s father got home from work with a gun, an officer said: “If you bust a cap, we’ll let the mob have you.”

The whites, once again, had free rein to terrorize.

“Of course, my parents stayed as long as they could without getting hurt,” Lee, 93, told HuffPost in June. “And then, they left the house to them, and they burned the place, drug out the furniture, tore the place up.”

Civil rights activist Gloria Richardson was one of several people who marched in Cambridge, Maryland, in 1963, fighting for desegregation. She wrote a telegram to U.S. Attorney General Robert F. Kennedy that year amid escalating violence in the small town. There had been gunshots, molotov cocktails and other violence at their demonstrations.

“I emphasize that violence has and most likely will occur,” she wrote. “The prevailing climate is such that a state of riot could occur at any second, without warning.”

By 1967, riots were sweeping Cambridge, and the rest of nation.

Perhaps the most stark, and widely known, example of this takes us to Selma, Alabama, on March 7, 1965.

Civil rights activists, including the late John Lewis, set off to peacefully march across the Edmund Pettus Bridge to advocate for equal voting rights. Lewis, then 25, was beaten by Alabama state troopers and his skull was fractured. Activist Amelia Boynton Robinson was knocked unconscious. They were tear-gassed.

“Some people gave more than a little blood, some gave their very lives. So to each and every one of you, especially you young people … go out there,” Lewis said in March of last year. “Speak up, speak out. Get in the way. Get in good trouble, necessary trouble, and help redeem the soul of America.”

And then there are too many instances to list from the last six years of the Black Lives Matter movement. At protest after protest against police brutality, Black activists were met with state-sanctioned violence at the hands of police.

“I guarantee you if that was a Black Lives Matter protest in D.C., there would already be people shackled, arrested or dead,” MSNBC anchor Joy Reid said Wednesday, after Capitol Police mostly stood by and watched the riot unfold. “Shackled, arrested en masse or dead.”

There were numerous reports of police violence at peaceful protests last year alone, including in New York City, Los Angeles and Dallas. In Minneapolis, after the killing of George Floyd, officers violated their department’s rules by shooting rubber bullets at protesters who were assembling peacefully, USA Today reported.

“No one can tell me that if it had been a group of Black Lives Matter protesting yesterday, they wouldn’t have been treated very, very differently from the mob of thugs that stormed the Capitol,” he said. “We all know that’s true, and it is unacceptable.”

Maybe accepting that truth is the first step toward dismantling narratives about patriotism, whose dissent is tolerated and the appropriate ways to protest. White terror helped establish this democracy; Black Americans have tirelessly fought for racial equality and freedom since its inception. Any narrative to the contrary is just watering down the truth of our country’s legacy.