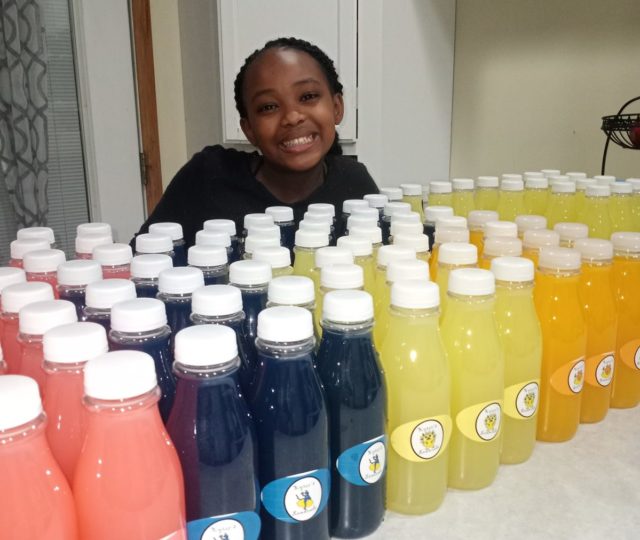 With a larger focus on social injustice toward the Black community in recent years, supporting Black businesses has become one of the avenues to further push for equity. Stepping away from big corporations or brand names and seeking out minority-led businesses is a direct, impactful way to support the community and encourage Black entrepreneurship. Many have taken note and action. The United States Census Bureau reported that between 2017 and 2019, “Black-owned businesses grew in all sectors of the U.S. economy,” with an eight percent increase in Black-owned employer businesses from 2018 to 2019.

Someone who happens to be a part of this statistical increase is Kyric Burt, who recently celebrated her 11th birthday. The Milwaukee native is the proud owner of Kyric’s Lemonade. Beginning in 2019 with a lemonade stand at a garage sale, the young Milwaukee business owner has found steady success, before even becoming a teenager.

It all started in the summer of 2019 when Burt wanted a pair of skates. She asked her mother, fellow entrepreneur Nikki Burt, if she could sell lemonade at her rummage sale to raise money for the skates. Nikki agreed. They put together a social media post to advertise the lemonade and according to Nikki, Kyric sold out in minutes. The unexpected reception turned Burt’s brief side hustle into a full-on business.

Not even the COVID-19 pandemic could stop the business’s success. With a dedicated, eager customer base, Kyric implemented curbside pickup in 2020 to safely distribute, initially selling traditional and pink lemonade in both gallon and 16 oz bottle sizes. That same year she hit an exciting milestone, selling her product at her uncle’s convenience store, Williams Pantry, located at 10734 W. Hampton Ave.

She continues to sell within the community as well. In 2021 she sold at Greater New Birth Church, and hosted a vendor booth every Tuesday in August at the second annual Northside Popup Farmers Market. There she told out on two occasions.

She hopes to sell in her local grocery stores as well, such as Pick ‘n Save, Metro Market and Woodman’s, as well as surrounding gas stations.

“It would be cool to walk in the stores and see my lemonade being sold to all people,” she said. Though she doesn’t plan on stopping there. Her biggest goal? “I want to see my business in every retail store that sells beverages,” she said.

Owning and opening a successful business comes with its challenges, such as ensuring supply meets demand. “The hardest part is making more lemonade,” she admits. “But my family helps.”

Kyric has undoubtedly inspired other young girls of color to pursue their own entrepreneurial dreams. Asked what advice she would give to them, she said, “Never give up and keep trying. If it fails, try again.” Such a determined spirit is a key factor in her business’s continued success and growth. She has even expanded from selling the sweet beverages to also offering accessories, such as kid-friendly nails, makeup and small toys.

Though some may solely focus on inward success, Kyric also has a heart for giving back. She makes continuous donations to the Human Society and encourages others to do the same through her social media platforms.

Kyric’s success, paired with her work ethic and generosity are the key ingredients to entrepreneurship. However, her mother Nikki does not want it to stop with her. Being the proud owner of Nikki’s Boutique, she spoke about the importance of generational wealth, saying “ It is very important for children to learn the value of a dollar early in life. It is important that I plant the seed of wealth in my children so once the value is learned, it will continue for generations to come.”

She also had advice for parents whose children have aspirations of becoming business owners themselves. “I advise to always listen to your child or children,” she says. “They will always tell you and show you what they desire to do and be. It is then our jobs as parents to cultivate that desire.”

Burt has certainly lived up to her own words of advice, and wants nothing but the best for her daughter’s pursuits. “My hope is that Kyric will exceed beyond her wildest dreams,” she says. “I have always tried to include Kyric in my businesses so that she can learn the ins and outs of business. I pray she applies everything she has learned from me, good and bad, and excels with Kyric’s Lemonade.”