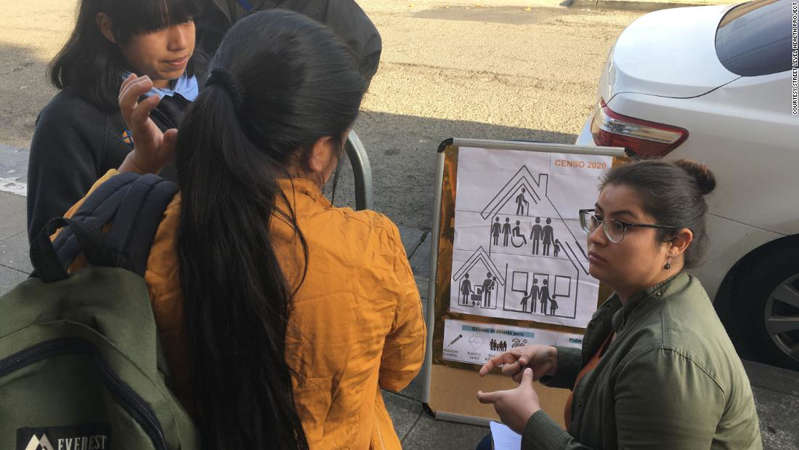 By Nicole Chavez and Harmeet Kaur

The Native American population grew to its largest size in generations after years of fighting for an accurate Census tally. The jump was surprising, experts and advocates say, and much more complicated than the result of successful outreach campaigns.

In 2020, the number of people who identified as Native American and Alaska Native (AIAN) alone and in combination with another race was 9.7 million, up from 5.2 million in 2010. They now account for 2.9% of all the people living in the United States, according to the Census Bureau.

The group was not exempt to the unprecedented growth of multiracial Americans across the country. In the past decade, they had a 160% increase that experts believe was driven by myriad factors, including more mixed-race families, the struggle that Latinos face during racial self-identification and Americans wanting to embrace their heritage even if they are not recognized as tribal members.

“The numbers really do reflect the diversity that we’re seeing today in the real world and in Indian Country. So we’re very pleased with it,” said Yvette Roubideaux, a member of the Rosebud Sioux Tribe and director of the policy research center at the National Congress of American Indians.

But Roubideaux and tribal advocates say it’s likely that the latest Census data is an undercount and Native Americans, especially those living in reservations will see those impacts.

“The ramifications of that — decreased funding, decreased essential political representation and inaccuracy in the data — those consequences are real,” said Ahtza Chavez, executive director of the NAVA Education Project.

After the Census Bureau reported that American Indians living on reservations and Alaska Natives were undercounted by approximately 4.9% in the 2010 survey, several groups including the Native American Voters Alliance (NAVA) Education Project in New Mexico launched efforts to achieve an accurate count.

The work of the New Mexico group led to the creation of a state coalition of tribes, tribal organizations and other groups, but the Covid-19 pandemic posed a significant challenge to their ambitious plans, Chavez said.

Many tribal lands and reservation residents rely on Census takers to drop off materials at their front doors because their addresses are not listed and many don’t have landlines or access to broadband internet. When some tribal nations closed their borders as a safety precaution due to the spread of Covid-19 last year, Native people couldn’t leave to complete background checks required to potentially get hired by the Census Bureau, said Chavez, who is Diné (Navajo) and Kewa Pueblo.

The fewer number of Indigenous Census workers only fueled the longstanding mistrust that some tribal members have of the US government, Chavez said, and made them reluctant to respond to the survey.

Latinos are nearly 30% of the total Native population

When Wen Calm filled out her Census form last year, she checked the box for Native American and the box for Latino. The 27-year-old is from Todos Santos Cuchumatán, a small village in the western highlands of Guatemala where most residents are Indigenous.

“We are not White, we are not Black, this is the closest I can get,” said Calm, who lives in Oakland, California. “I put Native American because we are Indigenous from the Americas, but a lot of people still have a lot of confusion as what to choose.”

The Office of Management and Budget (OMB), the agency that dictates the standards for collecting data on race and ethnicity in the US, defines “American Indian or Alaska Native” as “a person having origins in any of the original peoples of North and South America (including Central America), and who maintains tribal affiliation or community attachment.”

When Calm and her family immigrated to Oakland more than two decades ago, almost no one spoke Mam, the Mayan language native to Guatemala that they primarily spoke. In recent years, they have noticed more people walking in traditional clothing, seen many Guatemalan shops and restaurants opening in the city’s Fruitvale neighborhood and churches offering services in Mam, Calm says.

Gabriela Galicia, executive director at Street Level Health Project, a center that works with recently arrived immigrants and other underserved groups, says the majority of day laborers in Oakland have shifted from being Mexican to Guatemalan in the past decade and their primary language is Mam.

The center, which currently employs five people from the Mam community, is working with public health officials to highlight the need to collect data about the Mam people. Galicia says some estimates indicate there are several thousand people who are Mam living in the city but there isn’t an official tally.

Carolyn Liebler, a sociologist at the University of Minnesota who studies identities among mixed-race people and Indigenous people, says Latinos are “just not who we usually think of when we think American Indian” and their responses are valid if they fit the category’s definition.

Yet, Liebler says some may have not really known what to select for the race question and merely made an arbitrary choice.

“They’re faced with this situation where they have to answer that race question somehow,” Liebler said.

Mixed-race identity was denied by tribal nations, some say
Alaina E. Roberts’ great-great-grandmother was among the thousands of Black women and men once held in bondage by the Chickasaw tribe and whose descendants grew to be mixed-race as they settled in Oklahoma.

Roberts, an associate professor of history at the University of Pittsburgh, learned about her family’s heritage until she was in college. Since then, she has focused her research at the intersection of African American and Native American history, wrote a book titled “I’ve Been Here All the While: Black Freedom on Native Land,” and more importantly, expressed her identity more accurately, she says.

“The first time I was able to mark multiple races in the Census was 2010,” Roberts says. “It was so gratifying to be able to kind of express this identity that I was denied by my own tribal nation as well as by other people.”

Descendants of Black people once enslaved by tribes have long fought for the right to tribal citizenship and some have been able to obtain it. Earlier this year, the Cherokee Nation formally acknowledged the descendants of Cherokee Freedmen by removing the phrase “by blood” from its constitution and other tribal laws.

About 61% of those who identified as American Indian and Alaska Native population last year or 5.9 million people were multiracial, according to the Census Bureau.

The spike in multiracial people in the 2020 survey may have been a result, at least in part, to people like Roberts who recently deepened their understanding of their ancestry and embraced it, said Liebler, the sociologist at the University of Minnesota.

In previous surveys, there were two separate questions for race and ancestry. The ancestry question was eliminated from the decennial survey and instead included in the American Community Survey since 2005, according to the Census Bureau.

Before that change, millions of people had reported mixed Native American ancestry for decades, Liebler said. They were potentially multiracial American Indian and Alaska Natives and for this survey “many went ahead and reported it,” in the race question, Liebler said.

While there are people whose families are of mixed race, Roberts says there are concerns that some people may have falsely claimed to be Native American “because to them it’s exotic and it’s interesting.”

For Chavez, the jump in multiracial population was not a huge surprise. Her organization specifically ran campaigns encouraging people to embrace their multiracial identities and advising mixed-race people on how to fill out their forms to ensure that their heritage was reflected.

Identifying as Native American remains a complicated issue for many, Chavez says, because for most tribal communities, the right to belong and identify as a part of the community is something that is earned through participation and engagement — DNA and ancestry tests alone aren’t enough.

“I don’t necessarily feel threatened by people who generally want to engage or try to find some way back to understanding their culture or their lineage,” Chavez said. “[But] there’s an appropriate way to do it.”