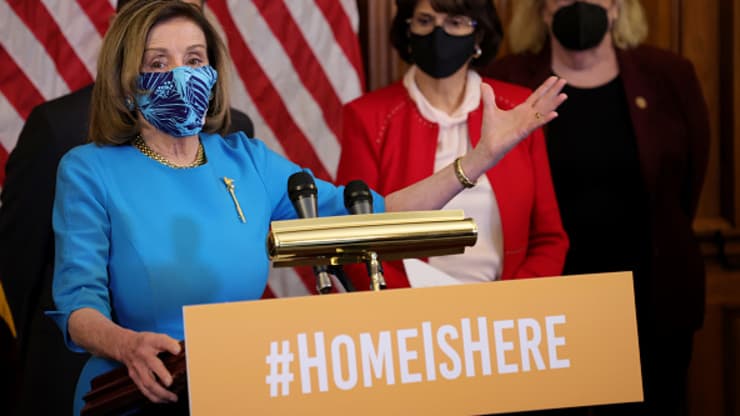 Lawmakers in the House of Representatives on Thursday passed two bills that would establish paths to citizenship or legal status for millions of undocumented immigrants, including those brought to the country unlawfully as children and workers in the agriculture sector.

The legislation was passed largely along partisan lines, with Democrats in favor and Republicans opposed.

The bills are narrower than the comprehensive immigration package introduced in February with the support of President Joe Biden. Even so, they face an uphill path to passage in the Senate, where 10 Republicans would be required to vote with every Democrat in order to approve them.

A bipartisan deal on immigration — a key priority for the Biden administration — has been complicated by recent events. Republicans have seized on a surge in unaccompanied minors who have been apprehended at the U.S.-Mexico border in order to press for harsher immigration enforcement.

About 4,500 children are in the custody of Customs and Border Protection, the majority of which are located at a facility in Donna, Texas, an administration official said Thursday. Under Biden, more unaccompanied children are being allowed into the U.S. than under Trump, whose administration quickly expelled minors seeking entry into the country.

In a televised interview on ABC on Tuesday, Biden said: “I can say quite clearly: Don’t come,” adding that “we’re in the process of getting set up, don’t leave your town or city or community.”

The administration has called on the Federal Emergency Management Agency to help shelter and transfer the minors into more humane facilities, while refusing to call the situation a “crisis” or “emergency.” During a call with reporters on Wednesday, an unnamed administration official said the problem predated the Biden administration and said legislation was needed to address it.

“This is a whole government effort. We are managing the situation right now, but it is going to take time to repair the damage that’s been done,” the official said. “We also need to work with Congress to pass an immigration bill, that gives us more sensible laws to implement and enforce.”

The two bills that passed on Thursday are the American Dream and Promise Act and the Farm Workforce Modernization Act.

The first would largely apply to those immigrants, known as Dreamers, who are protected under former President Barack Obama’s 2012 Deferred Action for Childhood Arrivals program. About 2.5 million people who arrived to the U.S. as children would be eligible for a path to citizenship under the law, according to its authors.

The act was passed 228-197, with nine Republicans joining Democrats in favor of the legislation.

The second bill would provide a path to legal status for farm workers who are in the country illegally, estimated to be at least half of the 2.4 million workers in the sector. Some agricultural workers would be permitted to gain a green card if they pay a fine and stay in the industry for an additional four to eight years, depending on how long they had already been doing farm work.

The bills are not as substantial as Biden’s immigration plan, the U.S. Citizenship Act of 2021, which would have created a path to citizenship for most of the 11 million undocumented immigrants in the United States. Democratic and Republican leaders have said in recent days that such a sweeping proposal would have virtually no chance of gaining bipartisan support.

“I don’t see a means for reaching that,” Sen. Dick Durbin, D-Ill., the majority whip, told CNN. “I want it. I think we are much more likely to deal with discrete elements.”

Sen. Lindsey Graham, R-S.C., a leader on immigration policy in the Senate, said Monday that “It’s going to be really hard to get a bipartisan bill put together on anything that has a legalization component until you stop the flow.”

The White House formally backed both bills early Thursday in statements that also called on lawmakers to move forward with the Citizenship Act.