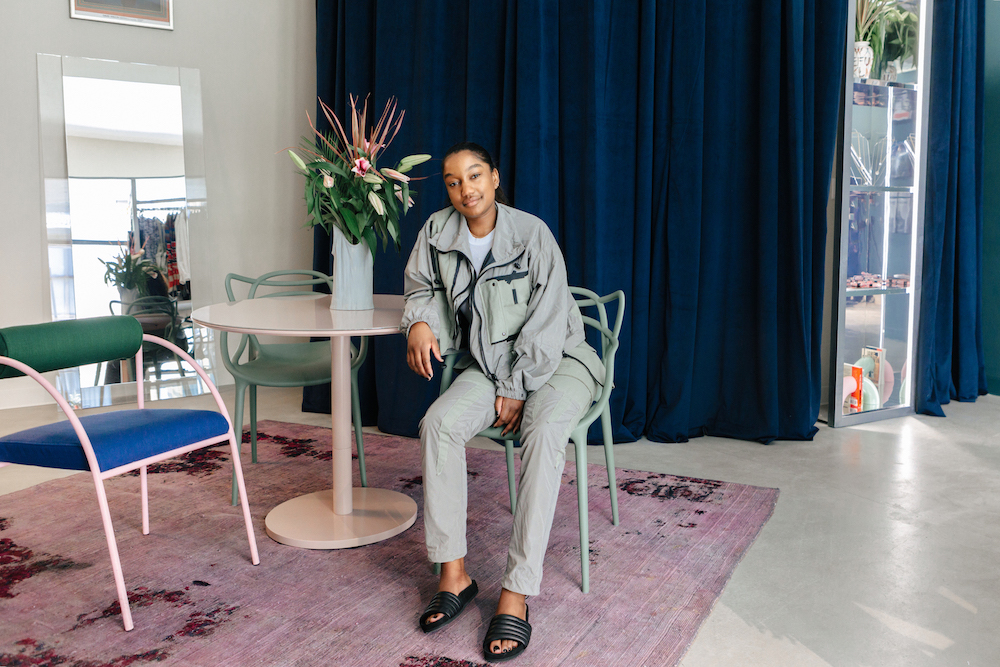 We spoke with entrepreneur Telsha Anderson to get an understanding of how she was able to launch her Black-owned New York City-based business during COVID-19 quarantine.

Opening a store in the middle of a global pandemic might not appear like the most logical thing to do.

But Telsha Anderson, an inspiring young entrepreneur, decided to try her luck in the retail market when she launched a luxury boutique called T.A. Located in the Meatpacking District in Manhattan, Anderson opened T.A.’s doors in early July, during a time where New York City was getting anywhere from 500 to 800 new COVID-19 cases daily. The space is a home for BIPOC-owned high-end brands for women like Ashya, William Okpo, and Mozh Mozh.

It may appear that Telsha Anderson’s niche in the fashion market appeared overnight, but this is something she’s been working towards over the past five years. Today, she’s the founder, owner, and buyer of her eponymous store. But, five years ago she was a graduate of Syracuse University fresh on the job market. Over a Zoom call, Anderson shared that it was nearly impossible for her to secure a position as a fashion buyer in New York City despite minoring in retail management.

“At the time, there weren’t even any entry-level positions, but I’d definitely look just to be curious,” she said. “I applied everywhere — like, everywhere — and it did not work.” Eventually, she decided to take any job that came her way, leading her to content creation and social media positions, brands like Food & Wine and Hypebeast’s Hypekids.

In 2019 she landed at Purple PR as an influencer manager. During her nine months there she wrote a business plan for the store. “After work, and honestly during work, I would be writing my business plan,” Anderson said. “If I had a project I had to do, I would hurry up and finish that up,” Anderson said.

To launch her brand, she combined her love for unique brands and her background in content. The young entrepreneur created a spreadsheet of 500 brands she loved and asked friends for feedback. After completing her business plan she was able to receive funding from investors. During the planning phase, she also juggled a freelance gig with Atlantic Records. She even took time wherever she could to search for a location for the boutique. She eventually signed the lease in August of last year on a 770-foot space that was previously a yoga studio.

She then began cold emailing brands, mentioning the prime location she nailed in the Meatpacking District. “We’re next to Restoration Hardware, and Sephora, and the Highline. I sold them on that,” Anderson said. Since a lot of the brands she was sourcing are located in Paris, she decided to fly there for market appointments. After this trip, she solidified exactly what types of brands she’d carry in her boutique. “I definitely conceptualized a completely different brand matrix, which is super contemporary, which I love, and really fun, and accentuates the female body,” she said.

Her exciting take on fashion is vivid on T.A.’s Instagram feed which is curated expertly. The designer’s that are sold online and in-store are deserving of a platform to shine, and Anderson’s distinct path makes this possible.

When New York City shut down due to the COVID-19 pandemic in March, Telsha Anderson soured her plans of opening the boutique that month. Rather than sit still, she launched the site in 24 hours with help from her sister who works at Squarespace. Instagram was essential in pushing forward her store’s brand identity. But the social media platform also presented Anderson as a new, Black voice in the fashion community worth paying attention to.

Due to ongoing protests and the omnipresent Black Lives Matter movement, Telsha Anderson realizes she was in a unique position. She took notice of companies and brands highlighting her online. It was a blessing to launch the e-commerce site in March as it led to immense support for her as a Black business owner. “I think the idea of being quarantined, and then everything that happened with Breonna Taylor and George Floyd, it was really eye-opening for people of color and people that are not in our race,” she said. “I was surprised at the knowledge that was being shared, I don’t think it’s ever too late to learn and to absorb that knowledge.”

We spoke with Telsha Anderson to get an understanding of her first 90 days after she opened T.A. She spoke candidly about launching the website and what it feels like being a Black entrepreneur receiving support in the current political climate.

I got word from most of the brands that the shipping was going to be delayed because they had closed their factories and production centers. So, originally, I was freaking out. The first seven days [was] me figuring out when the product would ship, since everything was closed. Then after that [I remembered I had] all these ads. That’s because I did all of the editorial work two months beforehand. So I was like, “I have all of these assets, I really want to start with PR. I really want to let people know what T.A. is.”

From there, I was like, “OK, I’m going to launch on Squarespace.” So my sister actually works in marketing at Squarespace. We were quarantined together, so she helped me with different items on the website. We built it in like 24 hours, and I would wake her up in the middle of the night, like, “How do I add this?” I’ve had a Squarespace website before, but the e-commerce version is much different. Way more intricate than I thought.

So I did that, and then I launched. And then, throughout the first two weeks, I launched 10 products per week online, and through each of those products, I essentially showcased on our Instagram what they were, how much they were.

[A bit after I launched online] the hashtag #SupportBlackBrands started. I was featured in Forbes, and WhoWhatWear. I mean, a whole bunch of them, and they were showcasing different items that were here. That was fun because I was able to give shout-outs to different brands all over. And I was able to pick which ones worked for the magazine, which clothes I would buy.

On Launching T.A. During The Tumultuous Political Climate

For me, like I said, it was the worst time to open, but it was also the best time to open T.A., because people really want to support young, Black, African American women, and I was a part of that conversation. I wasn’t going to do e-commerce, because I didn’t want to do it. And so honestly, this coming October that’s when I planned to launch the site.

The support really came from that people were really shopping, or supporting or following or sharing, or whatever they could do. It’s a shame that it had to happen in the wake of people that lost their lives because of police brutality. It’s a warm feeling to know that people want to support you and what it is that you do, but it’s also sad that it took so long. But because it took so long, my thing is let’s keep it even longer, you know? And let’s not let this die down.

I opened on July 8th. I had a lot of people come in talking about what they wanted to try on via quarantine. And what was this? And what was that? So that was fun. I also did the takeover with The Cut during that time, and then I did the takeover with Repeller. That was really fun. I was a nervous… wreck because I wasn’t used to being in front of the camera. Figuring that part of myself out was very different.

August was a bit slower and I was able to re-merchandise everything because we have a sale going on. So that was exciting, and I think one good thing about this store is there aren’t a lot of brands that are carried in this area, let alone over in New York, and a lot of them are all new. So I didn’t have to rush into any sales, like the summer sales in July. I was able to do it on my own terms, in my own way, which is really exciting.

I also sold The New Black Vanguard book in August which sold out in a day. Then I brought in Tyler Mitchell’s book [I Can Make You Feel Good] and that sold out very quickly, as well. I was able to really see what people gravitated towards and what they didn’t, especially with some of the knickknacks and the books.

On The Future of T.A. And Fall Releases

I finally hired someone. She started working in the store, and so I’ve been able to take some time away. That was good. I’m looking forward to what’s next. I definitely want to expand soon. We’re doing a flip of this store at the end of September, so that’ll be all fall brands, and then all of the brands are new, except for PH5 and Ottolinger. I’m excited about that.