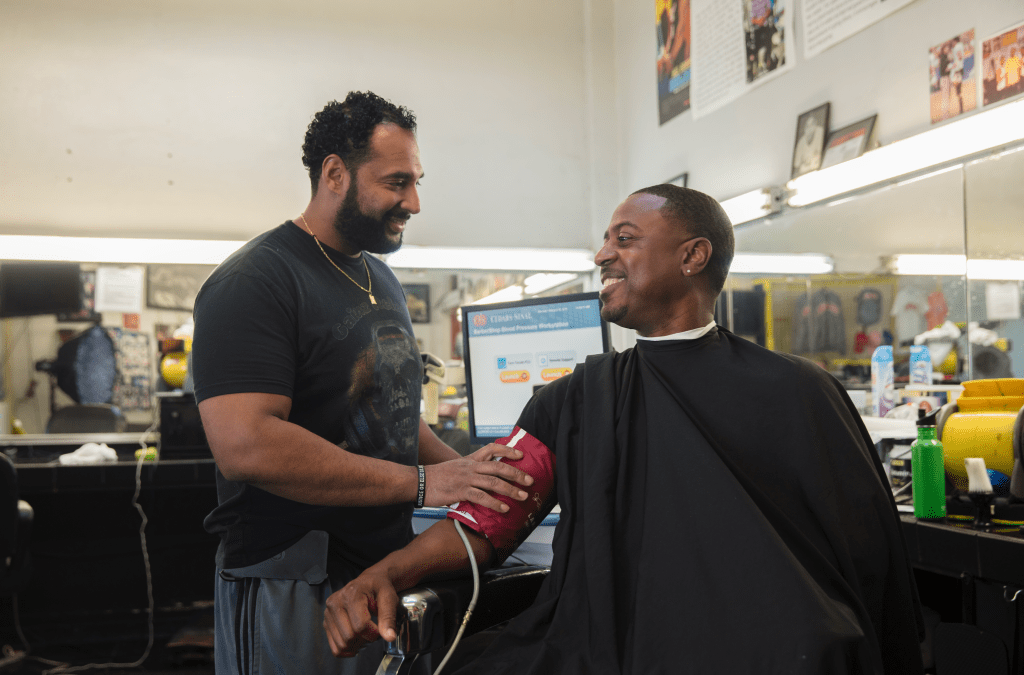 The Clinical Research Forum recognized the Cedars-Sinai’s Smidt Heart Institute with a 2019 Top Ten Clinical Research Achievement Award for its study aimed at developing a blood-pressure control program for African-American men in the comfortable and convenient environments of their barbershops.

In just six short months, the study – first published in the New England Journal of Medicine and led by the late hypertension expert Ronald G. Victor, MD – improved the outcomes and control of high blood pressure in more than 60 percent of participants.

The 12-month data published recently in the peer-reviewed journal Circulation backs up the results, proving that a pharmacist-led, barbershop-based medical intervention can successfully lower blood pressure in African-American men who face a higher risk of disability and premature death due to uncontrolled high blood pressure.

Not only are black men disproportionately affected by hypertension, they’re also the least likely population to seek treatment.

Nearly 64% of the study participants who worked with their barber and a pharmacist at the barbershop were able to lower their blood pressure.

Barber Eric Muhammad says that’s one reason he was so enthusiastic about the study. He’d hosted other single-day awareness events about hypertension, but Dr. Victor’s study aimed to find a long-term solution for treating high blood pressure.

“High blood pressure has cost the lives and health of a lot of good men,” Muhammad said. “What’s different about this study is it looks at bringing down blood pressure by using the men’s community—their friends, family, and support group.”

The collaboration between physicians, pharmacists and barbers showed that medical intervention in neighborhood settings can profoundly improve the health of hard-to-reach, underserved communities. Cedars-Sinai was nominated for the award by researchers at UCLA, the University of California, Los Angeles.

“This esteemed award is a true honor for our institution and the medical team who was driven to change and improve outcomes for this at-risk community,” said Ravi Thadhani, MD, MPH, vice dean of Research and Education at Cedars-Sinai, who accepted the award this week at the National Press Club in Washington, D.C.

The barbershop study is one of 10 award-winning studies identified by the Clinical Research Forum. Winners must exemplify major advances, resulting from the nation’s investment in research, to benefit the health and welfare of its citizens, and reflect the influential work being conducted by investigators at nearly 60 research institutions and hospitals across the United States, as well as at partner institutions from around the world. All nominated studies were published in peer-reviewed journals between November 2017 and December 2018.

Winners were selected based on the degree of innovation and novelty involved in the advancement of science; contribution to the understanding of human disease and/or physiology; and potential impact upon the diagnosis, prevention, and/or treatment of disease.

“It has been the privilege of a lifetime to work on this novel research and equally as rewarding to be part of an elite group of researchers recognized for their outstanding contributions to science,” said C. Adair Blyler, PharmD, an author on the study and one of two clinical pharmacists from the Smidt Heart Institute who traveled to African-American barbershops throughout Los Angeles to treat patients. “With these positive results behind us, we will now shift our focus to identifying cost-effective ways to broaden barbershop-based care and implement this novel model to other high-risk communities outside of Los Angeles County.”

Eduardo Marbán, MD, PhD, director of the Smidt Heart Institute, noted that Victor was the first to prove that if barbers offered blood pressure checks during men’s haircuts and encouraged patrons with hypertension to follow up with physicians, hundreds of lives could be saved annually.

“Not only do we miss Ron’s smile and smarts, but science is all the much poorer for his loss,” said Marbán. “Our institution will forever attempt to carry on his scientific ingenuity, passion for serving his community and commitment to advancing the field of clinical research. Right now, plans are underway to expand the barbershop study.”