Juneteenth Becomes Federal Holiday Celebrating End Of Slavery In US 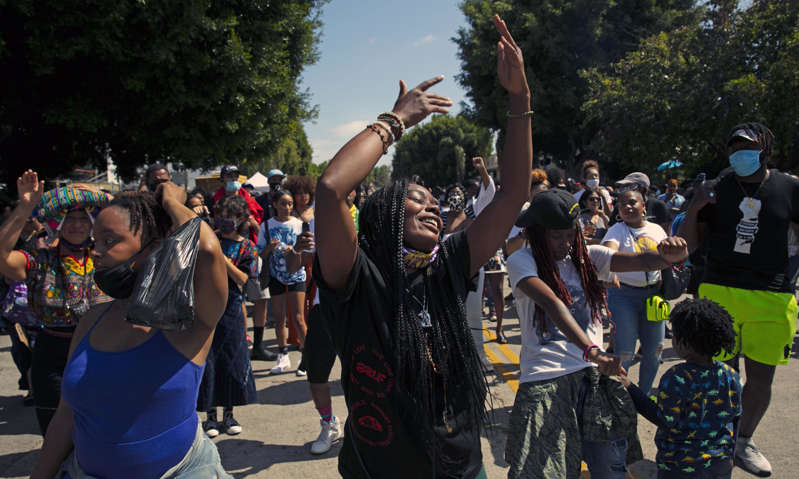 The US will officially recognize Juneteenth, which commemorates the end of slavery in America, as a federal holiday after Joe Biden signed a bill into law on Thursday.

At a jubilant White House ceremony, the president emphasized the need for the US to reckon with its history, even when that history is shameful.

“Great nations don’t ignore their most painful moments,” Biden said, before he established what will be known as Juneteenth National Independence Day. “Great nations don’t walk away. We come to terms with the mistakes we made. And remembering those moments, we begin to heal and grow stronger.”

Just before signing the bill, Biden added: “I’ve only been president for several months, but I think this will go down for me as one of the greatest honors I will have had as president.”

Kamala Harris, also in attendance, reflected on the historic nature of the day and the presence of Black lawmakers who worked diligently to advance the bill.

Harris, who is the first Black woman to serve as vice-president, told those at the White House for the bill signing: “We are gathered here in a house built by enslaved people. We are footsteps away from where President Abraham Lincoln signed the Emancipation Proclamation.

“And we are here to witness President Joe Biden establish Juneteenth as a national holiday. We have come far, and we have far to go, but today is a day of celebration.”

Black Americans are rejoicing at the move, but many say more is needed to address systemic racism.

Republican-led states have enacted or are considering legislation that activists argue would curtail the right to vote, particularly for people of color. Legislation to address voting rights issues, and institute policing reforms demanded after the killing of George Floyd and other Black Americans, remains stalled in the Congress that acted swiftly on the Juneteenth bill.

“It’s great, but it’s not enough,” said Gwen Grant, president and CEO of the Urban League of Kansas City. “We need Congress to protect voting rights, and that needs to happen right now so we don’t regress any further,” she added. “That is the most important thing Congress can be addressing at this time.”

Federal recognition of Juneteenth also comes as Republican officials across the country move to ban schools from teaching students “critical race theory”, the history of slavery and the continuing impacts of systemic racism.

The Senate unanimously passed the bill earlier this week, but in the House, 14 Republicans voted against it.

Most federal workers will observe the holiday on Friday. The Washington DC mayor, Muriel Bowser, and Maryland governor, Larry Hogan, announced that state and city government offices would be closed on Friday in honor of Juneteenth. District of Columbia public schools will also be closed on Friday.

Before 19 June became a federal holiday, it was observed in the vast majority of states and the District of Columbia. Texas was first to make Juneteenth a holiday, in 1980.

In Texas, residents celebrated the role their state played in the historic moment.

“I’m happy as pink,” said Doug Matthew, 70, a former city manager of Galveston who has helped coordinate the community’s Juneteenth celebrations since Texas made it a holiday.

He credited the work of state and local leaders with paving the way for this week’s step by Congress.

“I’m also proud that everything started in Galveston,” Matthew said.

Pete Henley, 71, was setting up tables on Thursday for a Juneteenth celebration at the Old Central Cultural Center, a Galveston building that once was a segregated Black school. He said the Juneteenth holiday would help promote understanding and unity.

He said his family traced its roots back to enslaved men and women in the Texas city who were among the last to receive word of the Emancipation Proclamation.

“As a country, we really need to be striving toward togetherness more than anything,” Henley said. “If we just learn to love each other, it would be so great.”