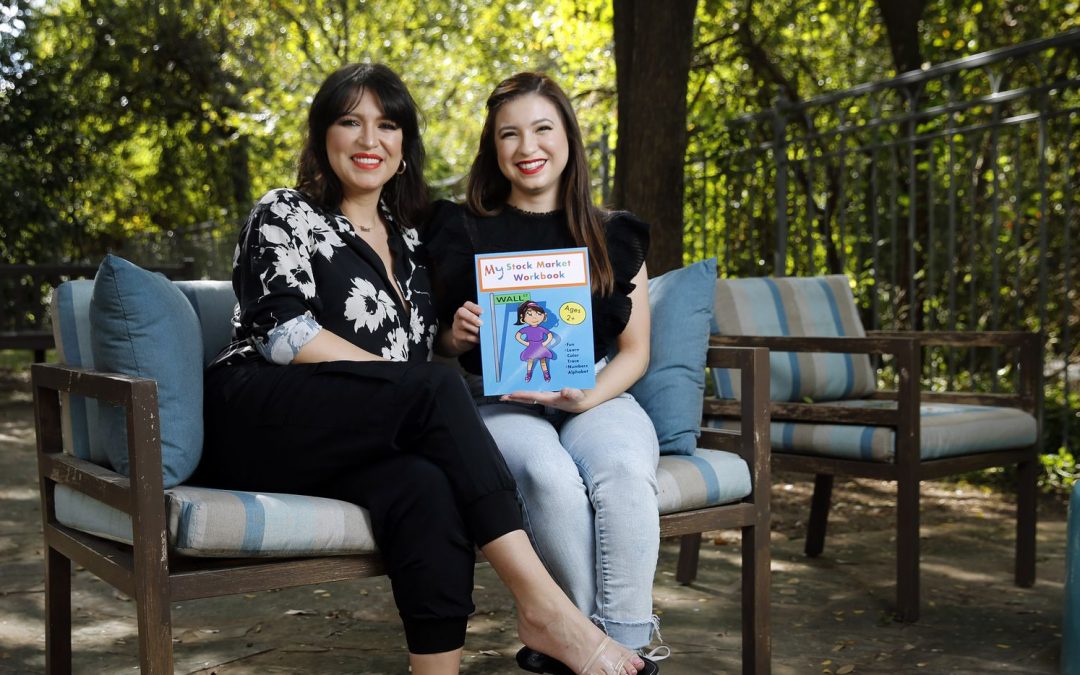 Elizabeth Ruiz can recall hearing her mother Linda Garcia, 40, yelling with excitement when the stock markets shot up.

At the time, Ruiz was mulling topics for her first Grow With Color workbook. The 25-year-old founded the Dallas-based children’s brand to provide low-cost educational materials rooted in the Montessori philosophy.

“Maria Montessori started her first school in a low-income neighborhood,” Ruiz said. “And I don’t think that it should be limited to only people who can afford it. It should be for everybody.”

She realized her five years of experience as a Montessori teacher combined with her mother’s knowledge of the stock market could be blended together to create My Stock Market Workbook, which teaches children about investing and building generational wealth.

The 82-page workbook gives children a general understanding about investing and finance while providing them with a variety of activities that review numbers and the alphabet. It is available for sale on Amazon for $11.88.

Garcia said her interest in the stock market was sparked in late 2012, when she first began investing. In the first year, she invested $200 a month and slowly built it to $400 a month in the following year. She invested mostly in Netflix stock, and her total initial investment was about $7,000.

Today, that investment is worth over $400,000. She said it taught her that $1 isn’t just $1 because it has the potential to grow into so much more.

“I really saw this as an urgent message to get out into our communities, most especially communities of color, where we are taught that the stock market is really risky,” the Latina mom said. “There’s a lot of fear surrounding it. I learned how to let go of some of the fears that I personally had, letting go of a scarcity mentality where I just want to hold on to my money instead of investing.”

Before moving to Dallas last year, Garcia worked for 17 years as a marketing executive in California at companies like Lionsgate and Netflix for TV and film programming catering to U.S. Hispanics. Her daughter graduated from the University of North Texas at Dallas, where she studied criminal justice, and is working on her master’s degree at Sam Houston State University in digital forensics.

This summer, Garcia launched an online course called Wealth Rules Everything Around Me through her online platform In Luz We Trust. The two-day course consists of three-hour sessions and seeks to connect new investors to resources needed to make informed decisions and empower them not to fear investing. It costs $208 upfront or two payments of $108.

“One of the biggest teachings in the stock market course is that we want to integrate money conversations into families of color,” Garcia said. “So we have this book that’s a great tool in order to begin those dialogues and these teachings with our children.”

My Stock Market Workbook is set up in the same way that Ruiz would introduce a child to a classroom. The beginning has coloring pages that transition into tracing, allowing a child to work on penmanship skills. From there, the book goes into the alphabet, and finishes with a “brain break” with more coloring pages.

“The words that I picked in the illustrations are something that the child might not be able to define at such a young age, but the child starts to visualize,” Ruiz said. “They’ll remember what a high yield savings account is — I colored that. When they get older and begin to understand, it’s not something that’s brand new to them.”

Photos of the workbook’s pages can be seen on Ruiz’s Instagram account, @GrowWithColor. She drew all of the book’s illustrations using her own childhood art as inspiration. She said she created the book for children as young as 2.

Garcia’s parents, both born in Mexico, were not educated past the sixth grade. She said she hopes to help Hispanics and other minority groups shed the “scarcity mindset” by teaching the abundance of investing.

While Latinos are the second largest and fastest-growing population in the United States, 28% of Hispanic households own stock compared to non-Hispanic white households, where 68% own stock, according to Pew Research Center.

Garcia wants these conversations to inspire families of color to open brokerage accounts and to have aunts and uncles gift shares in stocks instead of toys for holidays.

“It’s our dream to see children at a young age have shares in whatever interests them, whether it’s Disney or Target,” Garcia said “And hopefully when they’re 18 years old, they get to see the longevity, the importance of investing long-term and buying and holding that investment [so] they don’t have to worry about student loans. Or maybe they already have their down payment for their first home.”

Ruiz plans on making future workbooks more cost-friendly. Grow With Color now produces the books with Amazon, which allows her to self-publish. However, Amazon takes a sizeable cut of sales, driving up the selling price. She’s seeking a local publisher to make the books more affordable.

She’s also working to translate the workbook into Spanish. Her upcoming workbooks might apply to other subjects like math, sociology and English.

“In Montessori, our greatest pride is when a child works as if the teacher is not there,” Ruiz said. “So, that’s one of the main things we tried to do in [My Stock Market Workbook] for the children to enjoy working through play.”