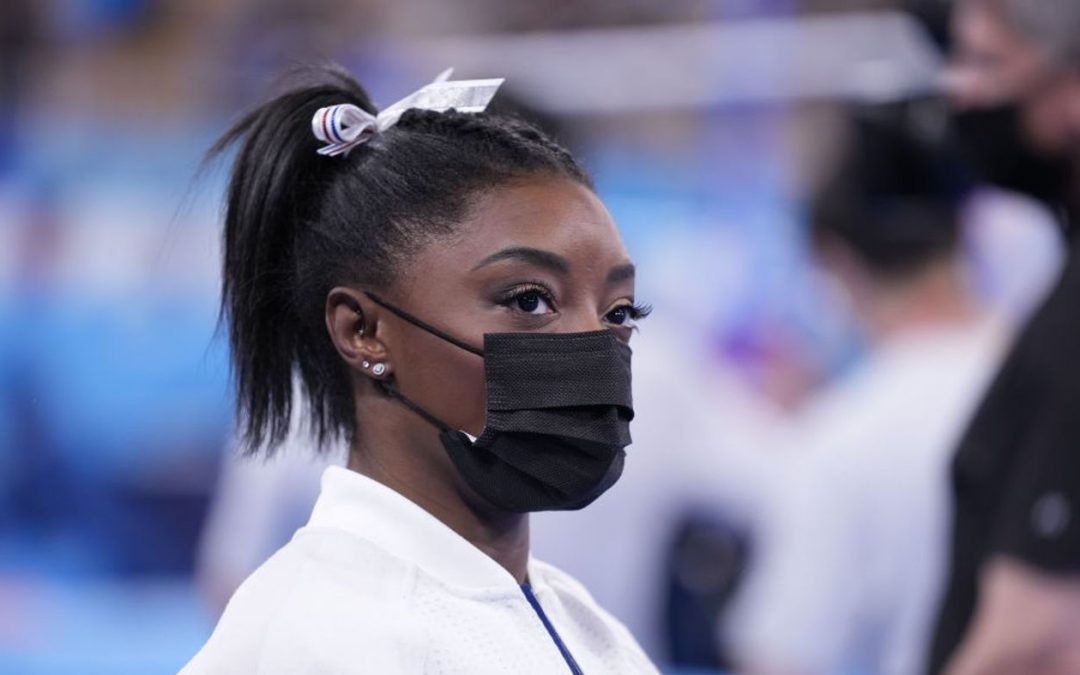 Two young black women who are at the top of their games in their respective sports have made a stand about mental health. As a black woman, seeing them open up like this about mental health has inspired me beyond belief. Through this they have sparked a wider conversation about the toll elite sport can have on wellbeing. They have also reminded the world that hey, elite athletes are humans too with real feelings and emotions.

Yesterday Simone Biles, who is regarded as the most decorated American gymnast and by many as the greatest of all time, withdrew from the team and all-around events at the Tokyo Olympics.

Simone later told reporters she chose to step away from the competition after her vault because she was “struggling with some things.” She went on to talk about her mental health and the immense pressure of being an Olympic athlete.

For Naomi Osaka, she returned to the court after a two-month absence since withdrawing from the French Open and Wimbledon to prioritise her mental health.

She went up against Marketa Vondrousova yesterday at the Tokyo Olympics but was defeated in the third round.

She said “I feel like my attitude wasn’t that great, because I don’t really know how to cope with that pressure.”

It is no coincidence that both athletes have referred to the pressure and mental toll on the same day, this should be a wake-up call for all. Headlines around the world have branded this turn of events ‘shocking’, but can we really be that shocked?

Simone and Naomi have both been relentlessly attacked by racist abuse and misogynist harassment throughout their careers. Being a woman in sport, especially a black woman, adds an extra layer we must understand and take into account. There is a common and incorrect stereotype about the ‘strong black woman’ who must be able to withstand all pain. She must carry on even in the face of adversity or even if she is close to breaking point. Through standing up for their health, they have reminded many of the need to prioritise your own wellbeing above all.

Both Simone and Naomi have also become the faces of the Olympics and the ‘it’ girls to beat. Simone was branded ‘superhuman’ for her athletic ability stripping her of her humanity or space for mistakes. She is automatically expected to jump higher and push further even at the risk of her own detriment.

I’ll be honest, as a black woman seeing someone who looks like me dominate a sport like gymnastics where representation lacked filled my heart with pride. Watching Simone nail “The Biles” ( a double layout with a half twist mid-air) always took my breath away. It’s just the little things that got me, just watching a woman with similar body type to me and similar hair – I could just relate. Similarly watching Osaka have such a presence on the court and hold her own was inspiring to watch.

What I have realised is as amazing as it is, they do not have to represent an entire community. Putting this all on their shoulders is not healthy, for anyone. But I have also realised in these moments of honesty I’ve never related to them more..

Within the black community there is still a bit of resistance to discuss mental health and the stigma that surrounds it. For me, watching them open up and be vulnerable on the world’s biggest stage has left a lasting impression. It also made me check in with myself for a second and just asses my own situation. It’s very easy to feel like you have to carry on a keep up appearances in the bid to look strong or unfazed, I too have been a victim of this. At times I allow the need to appear okay to overwhelm me unknowingly. This very brave and courageous move has taught me to break down my barriers a little bit and allow myself to feel.

Having mental health advocates that I can see myself in have unlocked new doors for me. Women of colour being at the forefront of making these changes is touching. My only hope is that it opens wider conversations not just within the sporting world but amongst the black community also. It’s so important to have these conversations and it is so refreshing to watch Simone and Naomi lead the way.

There is a lot of focus on the physical pain of being a champion but what about the emotional toll that comes with it? From the reaction of shock and dismay, we can see there is still a lot to learn.

Leading up to the team final Simone opened up on Instagram stating that she feels “the weight of the world on her shoulders at times.”

This was the first time we have heard Biles let us into her most inner thoughts on the pressure she feels to win.

When placed on pedestal, with the expectation to win at all costs, it is no wonder they have both struggled with the need to be exceptional. There is a famous saying in sports ‘pressure makes diamonds’ well that’s absolute rubbish. There is more courage in stepping back, admitting you need help and coming back when you are physically and emotionally well.

Whether it’s on the mat or on the court, both women have stepped up to the challenge and given their best. And this is a turning point within sport which should allow conversations about mental health to flow without stigma. I hope watching Naomi and Simone serves as a lesson to everyone, but especially black women to prioritise our mental wellbeing above everything else. Mental health is health.