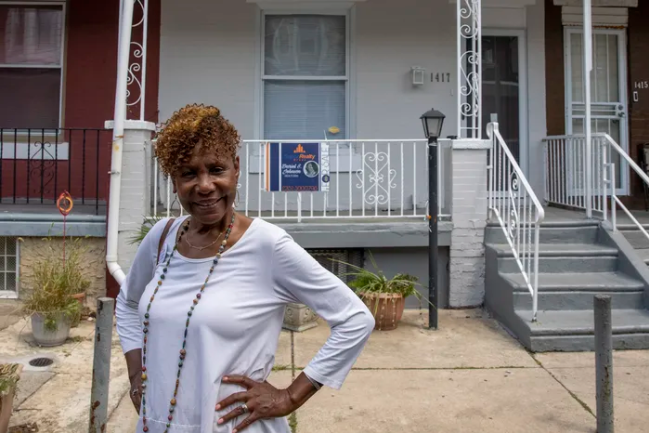 After retirement, Joanne Bourne began a new career in real estate sales. On the side, she “flips” houses, with an eye toward creating a legacy for her grand- and great-grandchildren.

Joanne Bourne dabbled in real estate for decades before making a new career of it in 2018.

She thanks S. Dave Hudson and his crew of professionals at the Super Realty Group in West Philadelphia for helping her make the leap. “You’re never too old to start something new,” said Bourne, who’s 65.

Think that Flipping Across America show on HGTV — except with a purpose higher than simply unearthing fabulous architectural details and making money.

“I want to teach my granddaughters to have a mindset of generational wealth,” Bourne said. “It’s about owning your own properties or businesses, instead of renting. It’s more than money. It’s a strategy.”

Bourne has three houses in her current portfolio and a strong relationship with a private lender in Delaware County. Although the current sellers’ market can be tough for small investors, she’s eagerly looking for houses in the city and nearby suburbs to scoop up, fix up, and sell at a profit.

“People who say you don’t need money to get involved in real estate? Well, you do need some,” she said. “You need the money to purchase and do the rehab, and those numbers have to be within the aftermarket value of the property. The numbers have to work. But sometimes they don’t.”

“Joanne is building something for her grandchildren to step into,” said Susan Naftulin, managing member of the Rehab Financial Group, a private lending firm in Rosemont, Delaware County.

“We have several other female clients creating a legacy for their families,” Naftulin said. “We’re seeing women, and women of color, creating an aura of possibility for future generations.”

Although employment discrimination and other racist practices have historically contributed to the persistent wealth gap between Black and white families, real estate also has played a key role. In the 1930s the federal government designated pretty much any residential real estate not located in majority, native-born, non-Jewish white neighborhoods as being risky for mortgage lending.

The practice, known as “redlining” of neighborhoods, became illegal in the 1960s. But a 2020 study by a private real estate firm showed how its impact had endured: A typical homeowner in a neighborhood federally designated as the riskiest for mortgage lending had $212,000, or 52% less, in personal wealth (as generated by property value increases over 40 years) than a comparable house in a “greenlined” neighborhood.

Also in 2020, the Brookings Institute reported the net worth of a typical white family ($171,000) in 2016 was nearly tenfold greater than that of a typical Black family ($17,000). And a recently released Pew Research report concluded that more than half of all Black and brown families in America live in rental units, compared with about a quarter of white families. This fact alone renders a higher percentage of people of color more vulnerable than whites to economic disruptions, such as those caused by the pandemic.

A woman of faith who in July was honored for qualities including grace and commitment by the congregation at Christian Stronghold Baptist Church in West Philly, Bourne worked as an IT professional at the National Park Service in Philadelphia for decades.

She built a new home at 10th and Bainbridge in 1990 (”I called it my country house in the city”) and has since purchased, renovated, and sold several other houses in Philly over the years. Her mother lives in a house Bourne bought decades ago at 17th and Ellsworth.

After retiring from the Park Service in 2011, Bourne earned a bachelor’s degree at Lancaster Bible College and did some human services work. But her interest in real estate continued to percolate, and in 2018 she landed a job at Super Realty as an administrative assistant at the firm’s busy office on North 64th Street.

“Dave just threw me into the fire and I had to learn,” Bourne said. “These young people here pushed me to get my real estate license. I had taken the 60-hour course but failed the test. They helped me study, and I got my license in February 2019.”

Encouraging employees, and clients, to achieve their goals is part of the “super” vibe, said Hudson, aka “Supa Dave,” a real estate professional since 2003 and the firm’s broker of record. He has several Superman-esque red capes; there’s also a Clark Kent-worthy vintage wooden phone booth in the office.

“We host a lot of community events,” Hudson said. “We have home repair classes, first-time buyer classes, and classes to help people become general contractors, because I saw the need not only for real estate education, but to promote financial literacy and generational wealth in the community.”

On a recent weekday, Bourne proudly showed off her recently completed project: a three-bedroom rowhouse on the 1400 block of North Hirst Street, not far from Super Realty. About a century old, the house now boasts a gleaming contemporary kitchen, new floors, an additional half-bathroom, and other improvements.

Bourne developed the house project in partnership with her friend Angela Dickerson, who also has had a longstanding interest in real estate. Hers was inspired in part by how much it meant to her parents to have been able to purchase their own home in University City (”My mother still lives there,” she said). Dickerson lives in a triplex she bought decades ago in the city’s Overbrook section.

One of the primary lessons, according to Bourne, is how to handle contractors, most of whom are men and some of whom are skeptical that women know what they’re talking about when it comes to renovating a home. Except, perhaps, in matters of color selection or other cosmetic matters.

Bourne said such individuals must be told — in no uncertain terms and repeatedly if necessary: “This is what I want. This is what I’m paying you for.”

Naftulin said Rehab Financial has financed Bourne “because of her financial stability and good credit history. The only potential risk was her lack of experience. But she had so much enthusiasm and had spent so much time positioning herself in the market that there was never a question of whether we should lend to her.”

Confidence in one’s abilities can be learned, as well as taught, Bourne said.

Take her granddaughters and great-grandson, for example.

“I want them to see that developing multiple streams of income will help them maintain a better life, which can extend to their [own] families,” she said.

“I want them to develop a can-do attitude in whatever area they decide to pursue. … I want them to see their potential and possibilities and not wait! Fear kills more dreams than failure ever will.”