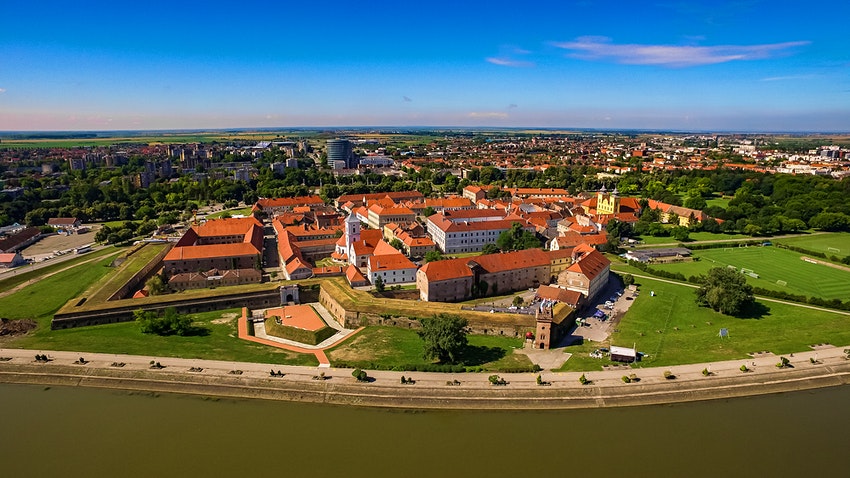 Tucked in the eastern part of Croatia, Slavonia is one of the country’s least explored regions. This land bordered by three great rivers, the Sava, the Drava and the Danube, surprises with its fascinating mélange of cultural and culinary influences.

It may be off the usual tourist trail, but Slavonia rewards visitors with its superb natural beauty, towns full of history and beautiful architecture, and hearty regional cuisine and excellent wines. From food to folklore, wine to wild nature, there’s much to experience and savor here.

Osijek is Slavonia’s capital and biggest town. This handsome riverside city is full of visit-worthy highlights, such as the waterfront promenade stretching along both banks of the Drava River with a pedestrian bridge joining them. A must-visit is the neo-Gothic Church of St. Peter and Paul. After admiring its majestic red-brick exterior, step inside to take in the magnificent stained-glass windows and high ceilings painted in brightly colored frescoes.

Head next to the east of the city to the historic Tvrđa, to explore this well-preserved 18th-century Austro-Hungarian military fortress. Today it’s a compact mini-town made up of just a few cobblestone streets linked by broad squares and lined with imposing Baroque-style buildings topped with red tile roofs. The university is located here, and many of the age-old edifices now house buzzing cafes and restaurants spilling onto the squares and catering to students and visitors alike. Pop into the Museum of Slavonia in the former Main Guard and Magistrate buildings for a primer on the history of the region.

Dominated by the 275-feet-tall twin spires and cupola of the city’s massive redbrick Cathedral of St. Peter, the first thing to strike you about Ðakovo is its skyline. The cathedral was completed in 1882, but its dazzling interiors have been expertly restored and the intricate paintings covering its columns, arches and high ceilings given a fresh lick of paint.

Just a short walk from St. Peter’s is the State Stud Farm where the famous Lipizzaner horses have been bred and trained since the early 18th century. These elegant white purebreds with a pedigree that goes back to the 16th century are known for their elegance and strength and are associated with the Spanish Riding School in Vienna. Take one of the guided tours to get up close and personal with these beautiful stallions.

To see the Lipizzaners strut their stuff in all their finery, visit during the first weekend of July for the Ðakovački Vezovi. This is Ðakovo’s event of the year, when city folk don traditional costumes, and the streets and squares fill with lively folk dances and singing.

Požega has a pretty old town of neat pastel facades, cobblestone lanes lined with Baroque-style buildings of elegant arches and arcades, and low-sloped roofs. The city was occupied by the Turks for 150 years until 1689, and later got a face lift in the 18th century during Austro-Hungarian times.

For some of the town’s finest examples of Baroque architecture, head to the main square. The Square of the Holy Trinity (Trg Svetog Trojstva) is dominated by the city hall and its distinguishing arcades, the whitewashed 13th century Franciscan monastery and Church of the Holy Spirit, four-story Jesuit College, and adjacent Church of St. Lawrence. Look for a column topped with statues of the Holy Trinity: this is a memorial to the victims of the plague which caused the death of almost half of the town’s inhabitants. An inscription reveals that its sculptor, Gabrijel Granicije, received a commission of 2000 eggs and 300 forints in 1749.

Heading north from Osijek, you’ll come to the northeast-most corner of Croatia, bordered by Hungary to the north and the Danube river to the east. This region of wooden houses topped with deeply sloped roofs is known as Baranja. If you’re looking for a taste of authentic country life and flavorful regional cuisine, prepare to be delighted.

This has been wine country since Roman times, and the terroir of the Danube basin’s rich black soil, combined with loess – a fine yellow sediment carried by winds, lend a unique quality to the region’s wine. It’s the white grape that reigns supreme here, and the essential ingredient to the local graševina variety. Fans of red won’t be disappointed because frankovka (Blaufränkisch), merlot, and cabernet sauvignon grapes are also cultivated here.

For a gastronomical circuit of the best food and wine the region has to offer, start in the heart of Baranja, in Karanac Ethno Village. This community of residential farmsteads and traditional inns is surrounded by gentle slopes blanketed with neat rows of vineyards.

Step into Baranjska Kuća, a traditional restaurant serving up local favorites cooked on open fires, to sample some of the delicious local fare. Take a seat at one of the long tables in the rustic dining room and scan the menu for fišpaprikaš (a spicy fish soup) or čobanac (a hearty meat stew).

The wine roads of Baranja

Your next stop is Kneževi Vinogradi for a taste of some of the best wines of the region at Vina Belje. Wine has been produced here for over 300 years, and today the winery and vineyards are spread over a vast 2.5-acre complex. Join one of the tours for a guided walk through the impeccably maintained vineyards and processing unit before popping in for a look at the massive brick cellars where wine matures in huge oak barrels under vaulted ceilings.

Another notable winery is Kolar, located in nearby Suza. Three generations of the same family have been making high quality wines here, which can be sampled in their 100-year-old cellar.

Complete your gastro tour of Baranja in Zmajevac for another wine tasting, or a stomach-filling meal at the Josić restaurant and winery. Dine in the atmospheric dining room under vaulted brick ceilings, or al fresco in the covered courtyard of cobblestones.