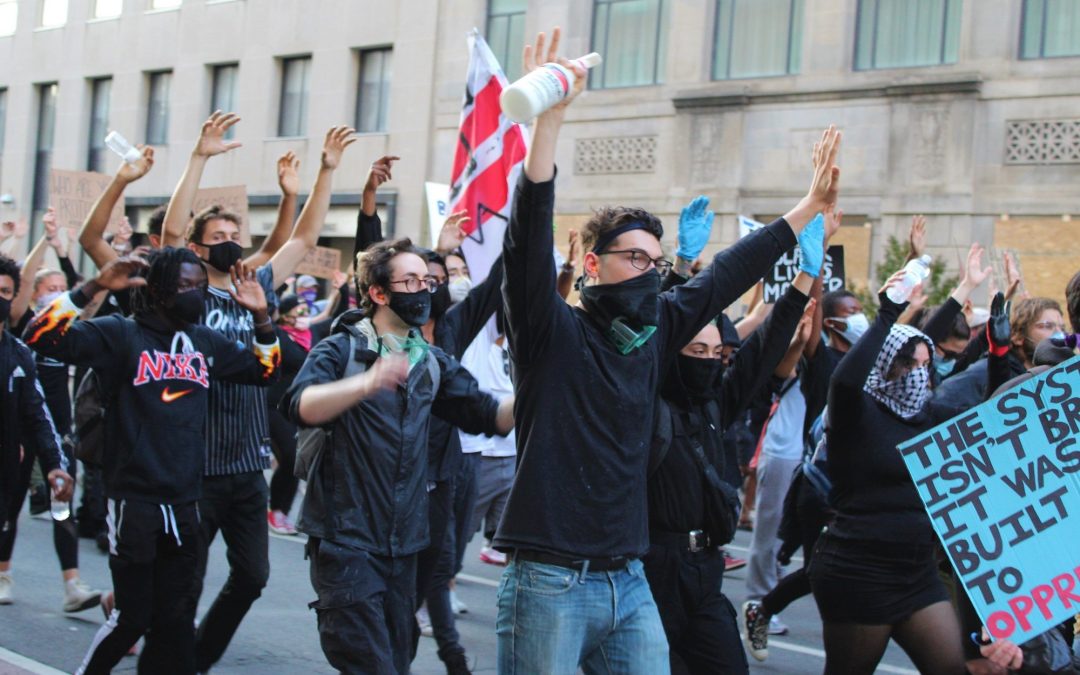 By Ali Harb in Washington

As thousands of protesters for racial justice approached the White House on Tuesday, Palestinian-American demonstrator Ahmad Hammad cut through the crowd with a cart carrying boxes of bottled water.

Hammad, 29, was one of many Arab activists who showed up at the protest in Washington to demand justice for George Floyd and other African-American victims of police brutality.

“I’m just trying to do what I can – support everybody, make sure everybody is hydrated,” Hammad told Middle East Eye.

He said post-9/11, Arab-Americans started to feel the effects of racial bigotry in the United States, prompting many community activists to identify with the Black struggle.

“Everybody is coming together at this point,” Hammad said.

Tuesday’s protest came after President Donald Trump ordered the clearing of a peaceful protest outside the White House at Lafayette Square on Monday so that he could walk to the front steps of a nearby church and pose for photos while holding a Bible.

A day later, the hundreds of demonstrators became thousands with much of their anger directed at the president, who had vowed to forcibly restore “law and order” amid furious protests across the country.

Security forces had sealed off Lafayette Square on Tuesday, pushing the crowds farther away from the White House. A row of heavily armed law enforcement officers stood along a newly erected fence as the protesters periodically shouted that the unrest would not end without change – “No justice, no peace!”

The diverse crowd included a significant number of Arab Americans, several of whom stressed the need for solidarity with the African-American community.

“I’m just standing here to bear witness, but at the same time we do have to understand that Black liberation is inseparable from Palestinian liberation because these police officers in front of us today, a lot of them go to Israel and get trained by the Israeli Defence Forces.”

He told MEE that the rise of “fascism” all the way to the highest office in the United States is a reminder of the need for solidarity between oppressed communities.

“This is a small and spiritual standing up; it is an awakening,” said Tabash, who was wearing a shirt that said “Free Palestine” in Arabic and English.

“The people around me are from all walks of life, all colours. It’s a rainbow coalition here. It has love as its driving impetus, and it’s beautiful to see. We’re all standing up because we want justice.”

The killing of Floyd by asphyxiation last week as a police officer pressed a knee into his neck unsettled the nation and prompted a wave of protests.

In many cities, the demonstrations have been accompanied by rioting and looting, as well as violence from police who have used tear gas, rubber bullets and live ammunition to disperse the crowds.

Trump offered the help of the military for states struggling to contain the chaos. And in the capital Washington, where he has jurisdiction over federal lands, he deployed fully armed federal officers in the streets in a show of force.

On Monday night, helicopters hovered low over the heads of demonstrators, and on Tuesday, soldiers and armoured military vehicles blocked intersections and flanked protesters in several areas of Washington.

The demonstrators often verbally confronted the soldiers, calling on them to protect citizens instead of upholding the president’s agenda and chanting: “Who do you serve?”

Kenan Nabulsi, 18, was chanting for equality while waving his keffiyeh at the fence separating protesters from security forces at Lafayette Square.

“I don’t have the fear that a lot of Black people have, but just being here with them, it’s enough to show our support. So, this is me showing that: I have my own personal struggle in this country, but I am going to be on your side for your struggle.”

Several Arab-American groups came out in support of the African-American community over the past week.

The Washington-based Arab American Institute (AAI) condemned the killing of Floyd on Tuesday, calling his death a “devastating reminder of the legacy of racism”.

“AAI stands alongside our partner racial justice and civil rights organizations and individuals demanding justice in calling for swift and meaningful policing reforms. The time is now,” the group said in a statement.

At the protest on Tuesday, Fida Adely, a college professor in Washington, said she was “outraged” by police violence against African Americans decrying the “systems of oppression” around the world.

“People around the world need to show solidarity with each other, and there has been great solidarity between Black Lives Matter and the Palestinian movement in the US,” Adely told MEE.

A 2016 platform by the Movement for Black Lives, a driving organisation behind the Black Lives Matter protests, endorsed the Boycott, Divestment and Sanctions (BDS) movement, condemning Israeli abuses against Palestinians.

On Tuesday, Rami al-Amine, a Lebanese-American Washington-based activist, said that he and his family were furious about the killings of unarmed African Americans.

He added that Arab and Black Americans both face racial prejudices, albeit in different forms, citing Trump’s “Muslim ban”, which restricts citizens from several Muslim-majority Arab countries from entering the United States.

“The attacks on immigrants in general have a racist bent to them, so that’s something that has connected the Black community and the Arab and Muslim communities,” Amine told MEE.